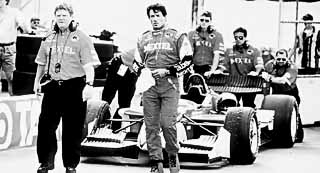 For a film focusing on the fast, faster, fastest world of professional open-seat race car driving, Driven crawls by like a Yugo with a serious drive-train problem. Like last year's Gone in 60 Seconds, the film's trailer -- which has been unspooling at your local multiplex for what seems like ages now, promises explosive thrills delivered at a pace roughly akin to the speed of sound (the sound in this case being that high-pitched, waspish whine of near-molten rubber on macadam). What director Harlin instead gives us is a melodramatic peek behind the lives and loves of a bunch of track rats and the odd CGI-enhanced crash scene. The whole affair feels desperately overscripted and straight out of an early Seventies TV movie of the week, complete with tortured egos and villains saddled with odd Euro-accents. Kip Pardue plays Jimmy Blye, an up-and-coming young hotshot with phenomenal racing talent but lacking the confidence to make the final cut. Overseen by his boss Carl Henry (Reynolds) and brother/manager Demille (Leonard), he's a kid on the edge of complete nervous exhaustion, racing day in and day out for massive stakes, and unable to maintain his focus once off the track and in the harsh media spotlight. Jimmy's idea of winding down after a race is memorizing course layouts on his laptop. Sensing that Jimmy's profit potential is at risk, Henry brings in old pro Joe “the Hummer” Tanto (Sylvester) to help the rookie out. Tanto used to be Henry's No.1 man until he lost it on the track one day and walked away from the game. (The nickname, one of a baker's dozen of tacky double entendres that pepper the script, refers to Tanto's penchant for humming aloud when he's “in the zone.”) Tanto's appearance as Jimmy's racing partner brings him back into contact with longtime rival Beau Brandenburg (Schweiger), a German set on taking Jimmy out this season -- the two have the sort of chummy anti-rapport that in some films might be labeled vaguely homoerotic, but here is simply dull. Which pretty much sums up most of the film. The script, by Stallone, is chock-full of racing clichés: Soured relationships linger in the background like the vulcanized detritus littering a freeway, and Stallone's squinty-eyed panache is even more pronounced than it has been in previous films. And because this is a Renny Harlin film, every single establishing shot of a new race course -- Toronto, Detroit, Tokyo, Germany, et al -- is accompanied by a scrolling title and shot after shot of chesty race babes salaciously winking out at you. (One running gag -- and I do mean gag -- shows a halter-topped female sliding some phallic foodstuff past her slicked and shining lips.) Surely the worst offense in Driven is the film's use of a constant play-by-play that rivals that of The Iron Chef for sheer exuberant hooey. We might as well be listening to the whole thing on the radio for all the needless exposition we get here. Not even the well-done and marginally exciting CGI smash-ups can drag this tired puppy out of the pit. It's not quite as bad as Cutthroat Island, I'll grant you, but it's woefully close.