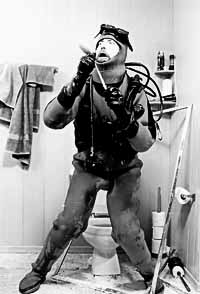 Freddy's tagline – “This time you can't change the channel” – pretty much sums it up. MTV provocateur Green thinks he's got you where he wants you, but apparently he's forgotten that even if people can't punch the remote, they can get up and walk out, which a stream of filmgoers did during the public preview I (somehow) sat through. For those out of the pop culture loop (you lucky, lucky people), Tom Green is a young Canadian comic who scored a coup a couple of years back when his cable access show was picked up by MTV and quickly became a smash hit for the music network. The improvisational and frequently annoying show features the hyperactive comic doing outrageous things to the man on the street (and frequently his long-suffering parents), such as shoving a microphone covered in dog crap in people's faces or making his friends perform with circus acrobats while hungover. Whether you look at it as neo-Dadaist performance art (and a lot of folks do) or not, it's sub-moronic humor that lowers the bar for everyone. On television, somehow, it works – as does MTV's newest cinéma vérité freakout, Jackass – but not here. I'll admit right up front that I like most, if not all, of Green's creatively asinine shenanigans on the small screen; this big-screen debut, however, is a horrible, brain-sucking misfire. Green, who looks like a chinless, hollow-eyed pederast at the best of times, is simply out of his league here, and the fact that the film drags interminably when it's actually a very average 90 minutes long betrays its essential emptiness. The script, by Green and buddy Derek Harvie, sucks so hard I had trouble breathing while watching. It's a comedic vacuum, and one that makes the lowest-common-denominator humor of the Farrelly and Wayans brothers seem like the second coming of Chaplin. Green commits the cardinal sin throughout: Freddie Got Fingered is boring. Not to mention witless, dull, and oh-so-predictably offensive. The story has Green as wannabe animator Gordon Brody, who, at the age of 28, leaves the suburban basement of his parents (the usually reliable Torn and Haggerty, who'll need to do some serious explaining for this one) and goes to L.A. to break into showbiz. There he meets a fellatio-obsessed, wheelchair-bound, rocket scientist named Betty (Coughlan), who eventually persuades him to stand up to his dominating dad and pursue his dreams. That may be the gist of the film, but along the way Green finds time to manhandle a stud stallion's ponderous penis, swing a fresh-born infant around by its umbilicus, and mutilate the poor tot next door. Did I mention he masturbates an elephant? No? Must have slipped my mind. There's also a wealth of child sexual abuse jokes, plenty of dull non sequiturs, and Anthony Michael Hall. It's quite possibly the stupidest film I have ever seen, and believe me, that's saying a lot. 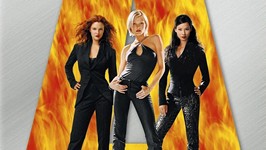 Charlie's Angels
Remember John Forsythe informing us that “Once upon a time there were three beautiful girls …”? Does that mean Charlie's Angels was a fairy tale? ... 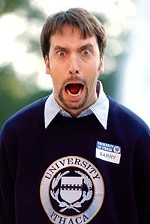 Road Trip
Teen sex farce meets teen gross-out comedy, which I suppose makes this a sexy movie for gross teens, or vice versa. All I know is ...