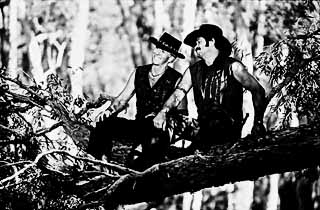 Thirteen years have passed since the last installment of the Crocodile Dundee series, and one has to wonder: Why now? Why, even, at all? Can't we just have our memories of that goofy guy in the hat and vest that warped an entire generation's perception of Australians? The croc hunter (Hogan) hasn't evolved that much in the past decade: Mick's still the same lovable mix of Aussie machismo and aw-shucks mugging, but animal-protection laws mean he can no longer kill the scaly beasts. He's a crocodile wrangler now. The face has grown a little weathered and he's morphed into a family man to his live-in, longtime love Sue (Kozlowski) and their son Mikey. When Linda gets a call to temporarily fill in at the L.A. bureau of her father's newspaper, the entire family relocates to Beverly Hills. In order to aid Sue's investigation of a corrupt movie production company, Mick goes undercover as a movie extra/animal wrangler. The investigation is really only a device to keep the plot moving forward; the real heart of the film comes from the comic set-pieces. They're not as strong as they used to be, those one-note fish-out-of-the-Outback bits, especially considering Hollywood's not that fresh of a punchline anymore. But there's something good-natured, even sweet about this well-meaning affair. Maybe it's the close relationship between father and son exhibited here. Easily one-third of the film is spent with Mick and Mikey wandering around -- the Outback, the Santa Monica Freeway -- while father unfurls goofy, yet ultimately worthwhile life lessons to son. Maybe it's just nice to see classic popular entertainment from the Eighties be continued for another generation of youngsters. (Although the slapsticky violence here, while never scary, does produce a couple of cringing moments when baddies get their due.) Or maybe it's just the fondness Crocodile Dundee and his pat Aussie routine inspires in a lot of us. Is the film -- the very concept -- outdated? Yup. Is the plot weak, the performances mostly forgettable? Yes and yes. How corny is the humor? Incredibly … but so is my dad's, and I've got a soft spot for him, too. 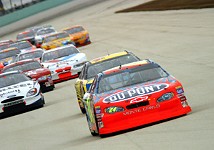 The Young Black Stallion
Envisioned as a prequel to 1979's beautiful adventure tale The Black Stallion, this new film is Disney's first narrative movie made exressly for the IMAX ...