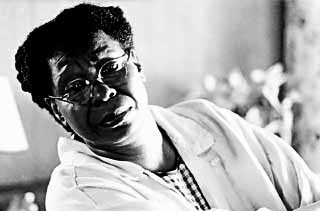 For several reasons, it comes as no surprise that Kingdom Come is based on a play (1991's Dearly Departed by David Dean Bottrell and Jessie Jones, who also did the screen adaptation): It's a small, character-driven ensemble piece, perfect for the stage; it features numerous thundering monologues, again, very theatrical; and the slapstick histrionics of this piece, accompanied by a host of hammy performances, feel like dinner theatre. Bad dinner theatre. And you have to provide the refreshments. Kingdom Come revolves around the death of the Slocumb family patriarch, Woodrow “Bud” Slocumb. His widow Raynelle (Goldberg) and their three grown children, Ray Bud, Junior, and Delicious, gather to pay their final, begrudging respects to a man described by Raynelle as “mean and surly.” The funeral and the unbearable Deep South summer heat predictably bring out the best and worst in the Slocumbs: the worst being the uncovering of Junior's infidelity and Ray Bud's struggles with alcohol; the best being the ultimate, gospel-choir-backed epiphany reminding us that all you need is love. And indeed, that is Kingdom Come's greatest asset: a sincere commitment to show a family who may be broken in spirit but is bound by love. However, for a movie praised so loudly as “family fare,” it contains a highly objectionable scene in which a father, nearing his breaking point, waves a gun in front of his wife and children and threatens to drive off the road and kill them all. That said, two hours of listening to the screeching of his wife, played by Jada Pinkett Smith, nearly drove me to a firearm as well. Hers is but one in a succession of shrill overacting jobs, bewildering as they come from actors, including Pinkett Smith, in possession of much more subtle gifts. (Veteran character actress Loretta Devine, so charming in Waiting to Exhale, is absolutely intolerable as the sister of the deceased.) The less flamboyant characters fare better: LL Cool J and Vivica A. Fox do a nice turn together as Ray Bud and Lucille, a loving, grounded couple that stands rock-solid through Ray Bud's alcoholism and Lucille's inability to conceive. Goldberg also turns in a solid performance as the Zen-like widow, and when she and LL Cool J command the screen, there's a hint of the film this could have been: something less hysterical, less forcefully zany. Unfortunately, they're too often upstaged by a cast who come off like they've got a case of opening-night jitters.