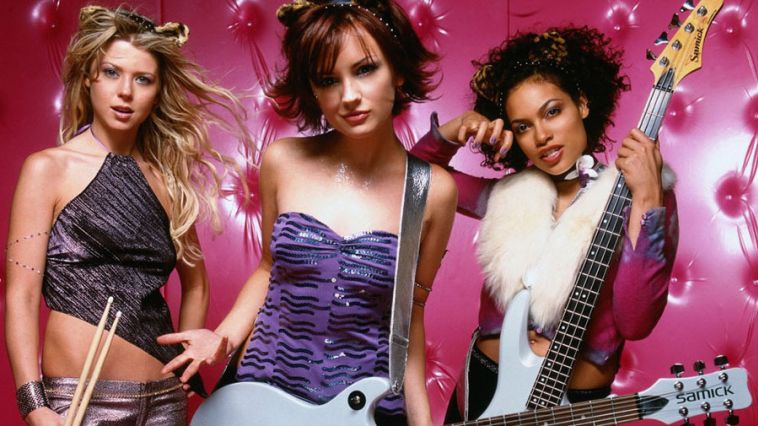 Josie and the Pussycats

Based on the Hanna-Barbera cartoon that ran on CBS and then NBC for much of the early-to-mid-Seventies, this Day-Glo, pop-art updating is far more subversive than its source material ever was. Although popular, the original series often felt like an addendum to the wholesome world of Archie Comics and a minor-league Scooby-Doo. Still, it was probably the first instance of overt Saturday morning grrrl power (you can bet your combat boots young Kathleen Hanna was a fan), and one that featured the first female black cartoon character to boot. That this updating works as well as it does is not only a pleasant surprise but much-needed proof that you don't have to dumb down (or for that matter over-smart) the old favorites to get them to work in a modern context. It's a silly, goofball romp, sure, but this newfangled Josie rocks far harder than her predecessor, thanks to Letters to Cleo frontwoman Kay Hanley, who provides the awesomely poppy soundtrack. It's fun in all the right places. And not to read too much into it (but why not?), it's also a cutting, subversive, pop-culture sociology text that manages to skewer everything from the current deluge of craptacular boy bands to corporate branding and teen-demographic marketing trends. Who'd have thought that the residents of Riverdale could turn out to be first-rate culture jammers? The impossibly cute Cook is garage-rock phenom Josie, with Reid as the ditzy drummer Melody and Dawson as bass babe Val. Actually, as the film opens, they're less phenoms than first-year SXSW wannabes, rocking out at empty bowling alleys and staging impromptu street jams in a desperate bid to attract attention. Opportunity almost runs them down in the form of pop music impresario Wyatt Frame (Cumming, riding his third terrific role in a month), who, having just lost his star boy band DuJour (that's actually their name) to a pre-planned plane crash, snaps up the chirpy trio and promises to make them overnight sensations, which he does. All this is a front, however: As it turns out, the music industry and the government are in cahoots with big business to brainwash the youth of America into good little consumers via subliminal messages. Well duh. The evil Frame is partnered with the equally conniving Fiona (Posey), who, in turn, has double-teamed with the Powers That Be to subvert the cultural landscape (which, in Josie and the Pussycats, is almost entirely made up of garish product placement) and make everyone love her. Girls just wanna have fun, but bad girls just wanna be loved, apparently. The whole film is basically one long, extended riff on the perils of conformity and why shopping at the Gap is lame, lame, lame. This is, of course, a borderline revolutionary concept in the world of teen-aimed movies, which typically tow the party line and have their characters scarfing at Mickey D's and gulping Pepsis like they were liquid ecstasy. Josie and the Pussycats, on the other hand, not only bites the hands that feed, it manages to make the whole ludicrous situation tremendously fun in the bargain. While it's no classic -- a fair amount of the gags are only half-there, and the film's riotously colorful tone feels forced at times -- it is a step in the right direction, away from the hideously manipulative culture of corporate branding and towards self-empowerment and individuality. Like the T-shirt says: Girls kick ass. Again. 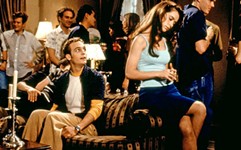 Can't Hardly Wait
This better-than-average teen sex comedy looks at a bunch of seniors on the night of high school graduation.