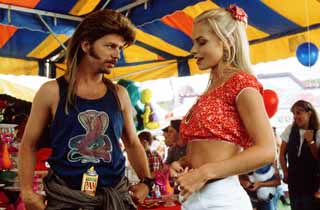 If you really, really want to spend 90 minutes on a picaresque adventure through the gator farms and fireworks stands of Roadside America, with a mulleted David Spade in acid-wash and a chest wig as your guide, there's nothing I can do to stop you. Sally forth, gentle viewer, and enjoy yourself. En route, you will experience a steady supply of doo-doo jokes, dispensed in seven-minute intervals by the Script-O-Tron 3000TM. Co-scribe Spade has, thoughtfully, set the machine to alternate with explosions, a mile-high mooning, generic model-actresses attired in Daisy Dukes and filmed with an almost gynecological curiosity, product placement for Pam cooking spray (apparently now a subsidiary of Sony), and the almost indescribable spectacle of a friendly dog's testicles adhering to a frozen front porch. Add in Kid Rock, a dead Christopher Walken achieving an erection, and an inexplicable nod to Silence of the Lambs, and you have one colossal extrusion – much like the “big old frozen piece of shit” that falls out of the sky early in the film. As the titular redneck naïf, Spade struggles through a lame frame story with Dennis Miller as a shock jock and embarks on a whimsical journey to find the parents who abandoned him at the Grand Canyon as a child – this, after having surgically applied a hockey-hair wig to his malformed skull. The premise is skimpier than the tank tops of co-star (and Dawson's Creeker) Brittany Daniel, worth a skit at best. But on some level, the material could work. After all, much effort has been expended to attire Spade in a T-shirt that says "I Choked Linda Lovelace," and some intrepid person has excavated Eddie Money from the cock-rock rubble in which he's lain since 1989. There's an oddball quality to the ensemble that might even be lovable if the movie weren't so glib and perfunctory. But the whole production is held together with Bondo. The filmmakers won't lay off the schmaltz – instead of bitter bon mots from the formerly splenetic host of “Spade in America,” we get homespun homilies worthy of Forrest Gump. An army of producers (including Adam Sandler and sidekick Robert Simonds) manipulates debuting director Dennie Gordon, a veteran helmer of TV dramedies, like a marionette. The acting performances are phoned-in across the board. Miller, in particular, is strangely and sadly lifeless, as if he's been replaced by a hologram or an android with a sarcasm module, and B-movie stalwarts like Joe Don Baker and Fred Ward are deployed almost contemptuously, like tacky little tchotchkes on a mantelpiece. But it'll probably still make buttloads of money: The kitsch factor is undeniable, and the lowbrow farce formula to which the filmmakers are so unswervingly devoted has borne boffo fruit hitherto. 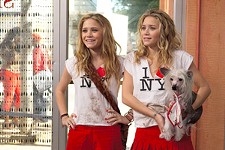