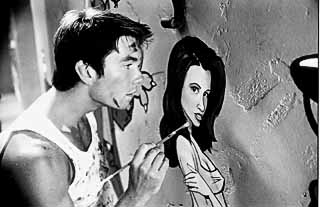 I honestly didn't think I'd see anything onscreen this week that was more patently offensive than that Max Hardcore “gonzo” porn loop a buddy of mine brought over the other weekend. Fate, however, has intervened to prove me wrong, and although Tomcats is devoid of the sexy titillation its TV spots promise (the awesomely creepy Hardcore apparently has that all wrapped up, doubtless in duct tape) the film is chock-full of nasty moments. Just not the good kind. Tomcats is a godawful hell-wreck of a film, utterly meritless, clueless, and sloppy all the way down the line. As far as gross-out comedies go, this one takes the proverbial cake, slathers it with a heaping helping of frat-boy misogyny, and then has the cojones to be equal parts stultifyingly dull and wearyingly unfunny. It is a comic nadir, the stanky green crust caking the bottom of the well of titters. It sucks, but never swallows. The creaky plot follows avowed single guy Michael Delaney (O'Connell) and his pals Kyle (Busey), Steve (Sanz), and Dave (Reitman) as they embark on manly wager: The last bachelor gets all the dough they've been setting aside, while the others get, you know, married. When Michael loses $51,000 to Vegas bad guy Carlos (Maher), he hatches a plot to ensnare co-horndog Kyle via the lovely (and apparently greedy) LAPD babe Natalie (Elizabeth), with whom he, naturally, falls in love. Got that? Me neither, but somehow I don't think anyone's going to care. Certainly not writer-director Poirier, who appears to have switched genres, moving from 1997's harrowing lynching drama Rosewood to this year's David Arquette-and-a-big-dog comedy See Spot Run, before finally bottoming out with Tomcats. (Don't ask me to explain that career trajectory -- I've tried to come up with a plausible explanation not involving some bizarre shadow government identity-swapping operation and come up short three times now.) As a writer, Poirier appears to be following in the Farrelly brothers/American Pie tradition of the moment, but compared to this feature debut, the Farrellys rank right up there with Mike Nichols and Elaine May, and American Pie might as well be Chaplin's City Lights. Tomcats' highlight, depending on how you look at it, is presumably the extended sequence involving an errant, cancerous testicle that bounds all over a hospital set like a Flubber-ized tumor. I won't say where the Tom Green-inspired testiculus ends up but I will say that David Ogden Stiers really ought to floss more. I used to like the hunky O'Connell in Sliders, but here he's just another pretty meatcake in too-tight shorts and a bad pad. Busey, who put a sizable dent in my radar with his bizarre turn in Peter Jackson's The Frighteners, is even scarier in Tomcats, playing a parody of a parody that borders on the offensive. As if all this bad news weren't enough, the film is a textbook example of bad editing, set design, and lighting, with washed out skin-tones, hideously clashing color palettes, and Bill Maher as a Vegas strong-arm. File this one under What Were They Thinking? 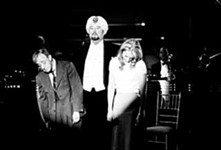 The Curse of the Jade Scorpion
“I like your early, funny movies better,” someone tells Allen's filmmaker alter-ego Sandy Bates in Stardust Memories, and it's difficult not to echo that sentiment ... 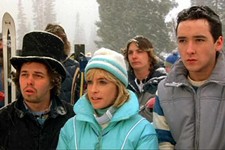