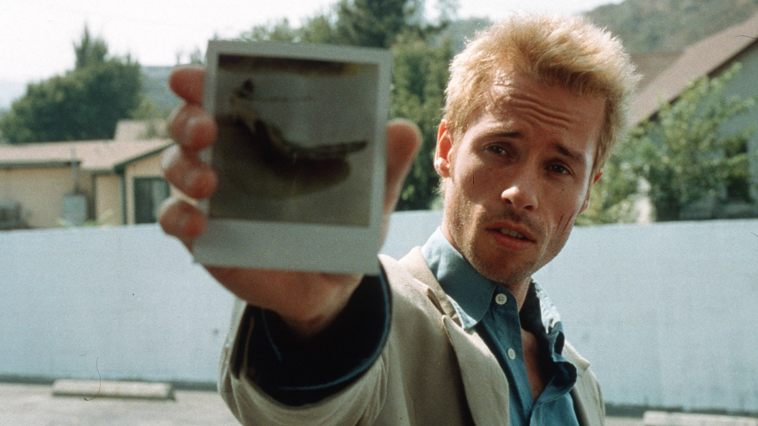 In closeup, we watch an exposed image fade from a Polaroid snapshot. Then we see a gunshot occur in reverse. Next comes the story's dramatic climax. These images constitute the opening moments of Memento, Christopher Nolan's darling of this past winter's festival circuit. The movie is a mind game premised on the idea that the story remain a puzzle that needs to be figured out by the viewer -- along with the story's protagonist. We're confused, and so is Leonard (Pearce), the character through whom we experience the movie. Leonard is an unreliable narrator because he suffers from short-term memory loss -- a consequence of a blow he received after finding his beloved wife raped and murdered. He can't hold any new memories or information in his mind for more than a few minutes so he compensates by taking Polaroids of key people and places and writing notes in their margins which he refers to constantly in his quest to find his wife's killer. Another device he uses is to have important pieces of information tattooed all over his body, a strange sight which instantly provides a sense of the character's aberrant obsessiveness (although, given Leonard's frenzied state, it's realistically doubtful that the character could find the time to have all this perfectly stenciled and patterned lettering drilled into his body). Leonard can't figure out who's his friend and who's his enemy; he trusts nothing but his own handwriting and relies on the skills he acquired in his former life as an investigator of insurance fraud to ferret out the truth. But therein lie his fallacies. You shouldn't always trust what you read -- even if it is in your own handwriting -- and now Leonard also finds himself inexplicably troubled by an old insurance case he investigated, whose resolution nevertheless left questions unanswered. Memento is modeled as a film noir thriller, a story formula rife with amnesiacs and untrustworthy characters, insurance investigators and drug dealers. Memento's gimmick is that it tells its story in reverse, forcing the viewer to get in on the act of piecing the story together. This involvement passes for enjoyment because it invests the viewer in the movie's outcome. However, another way to test the story is to look at it in its logical order; in doing so the story becomes a slip of a tale, hardly the material of a thriller. In forward progression, the narrative would garner little interest, thus making the reverse storytelling a filmmaker's conceit -- one that dovetails with Nolan's one previous film Following about a thief who is obsessed with trailing the people whose homes he invades. Memento additionally foregrounds all the implicit questions that surround the art of filmmaking -- questions about what reality is, points of view, memory, etc. The film's ultimate irony may be that once Leonard exacts his revenge he will be unable to remember it -- and if that is the case, does that make revenge pointless? The presence in Memento of Steven Tobolowsky (who played the cheerful insurance salesman who greets Bill Murray in the street every morning in Groundhog Day) as another amnesiac underscores the film's conscious riffs on the “not fade away” characteristics of the filmmaking process. The performances and the widescreen cinematography of Memento are lovely to look at, but once you've seen it all once I bet you'll wish you were watching Groundhog Day -- again.