I've got good news and I've got bad news. The good news is that Company Man is only 81 minutes long. The bad news is that Company Man is 81 minutes long. That's nearly an hour I could've spent watching C-Span, an activity with far more comic potential than Askin and McGrath's shockingly unfunny Cold War parody. Askin, who directed the John Leguizamo showpiece Spic-O-Rama in 1993 and -- oddly -- penned the 1982 Susan Seidelman film Smithereens, and McGrath, the writer and director of Emma, secured one hell of a terrific cast and then apparently decided to pen the flaccid script somewhat later on. I'm sure it sounded good on paper. Company Man purports to tell the real story behind the events leading up to the Cuban Missile Crisis, a historical landmark not often noted as a comedy gold mine. In Askin and McGrath's script, the CIA's disastrous attempts to oust upstart Fidel Castro (LaPaglia) take all manner of bizarre forms (many of them drawn from real life, believe it or not): i.e., sneaking a depilatory into the leader's shampoo, sending him a box of poisoned cigars, poisoning him with arsenic-laced fountain pens. That these things actually occurred is far more laughable than anything in Company Man. The film has the entire sordid affair arising from the muddled involvement of one Allen Quimp (McGrath), a naïve milquetoast professor of grammar who becomes enmeshed in the plot to kill Castro when he lies to his domineering father-in-law and wife (Weaver), telling them he's actually a CIA operative. When the actual CIA gets wind of his scam they find in him a willing patsy and ship the chinless wonder off to Havana to gather info on Fidel and root out communism. Once there, he meets with an assortment of astonishingly clichéd and shopworn characters straight out of a bad Mad Magazine parody, circa 1962. There's Turturro's shrill USMC leader, a man incapable of speaking in anything but a boisterous shout (and, really, Barton Fink as a gung-ho McCarthyite? Yeesh.); Lowther (Allen), the CIA's new man-in-Cuba who regales Quimp with endless neurotic tales; and worst of all, poor Alan Cumming as the deposed General Batista, here portrayed as a mincing fop who plays the piano with his backside. (Fans of the otherwise-brilliant Cumming are advised to skip this and go straight to Spy Kids.) Other, more pointless cameos round out the already crowded script -- Phillipe as a defecting Russian ballet dancer, Welcome to the Dollhouse's Heather Matazarro as a student driver -- and contribute the overwhelming sense that this is some Off Broadway (way off) farce gone horribly awry. Farce it is, with characters zipping in and zooming out, spouting groaningly bad one-liners, and lengthy gags that build and build to nothing more than downward-sloping plateaus. I'm astonished that even at 81 minutes the film contained not even one little chuckle. With a cast like this, that's almost as amazing as the fact that this deadly dull tripe has secured a commercial release (thanks for nothing, Paramount Classics). 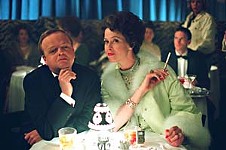