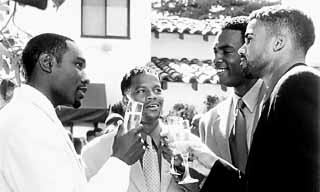 Hardwick's debut feature goes to pains to distance itself from the black male ensemble comedy genre that has blossomed in the past few years (F. Gary Gray's Friday is a good example) and instead tries for an earnest look at how the other, more successful half of the 'hood lives. It's refreshing to see a portrait of young urban black males who don't necessarily spend all their onscreen time shooting hoops, sippin' gin and juice, and blasting Ice Cube from their dropped-down rides -- a reality check of this sort has been far too long in coming -- but The Brothers is so eager to take things in the other direction that you begin to wonder if this overachieving, hyper-successful quartet of smart guys is as much a fallacy as white Hollywood's stereotypical version. I'll go out on a limb here and suggest that Hardwick's take is infinitely more appealing, not least because is shows powerful, more-or-less fulfilled, and intellectual young black males engaging in straight talk about relationships and life lessons while working from a script (by Hardwick) that doesn't require them to talk down to each other (or us). The titular brothers in question are Jackson Smith (Chestnut), Brian Palmer (Bellamy), Derrick West (Hughley), and Terry White (Moore) -- a lover, a lawyer, a doctor, and a financial whiz, respectively. As The Brothers opens, Jackson is wracked by nightmares in which a shadowy figure in a bridal gown pulls a gun and blows him away. Subtlety is not the most apparent of Hardwick's skills, obviously, but I'll give him points for lowering the symbolism bar to near-limbo-levels. Jackson, who seems to spend his time alternating between sessions with his comely therapist and his divorced mother's garden parties, soon meets the (apparent) girl of his dreams, a doe-eyed photographer named Denise who catches his eye in the park and promptly zips him home to show him her etchings. Alas, Denise harbors a dark secret, one involving a past dalliance with Jackson's estranged dad Fred (Powell), whom the overreaching buppie seems at once drawn to (he's a player) and repulsed by (he's a player-hater). There are three other storylines paralleling Jackson's intimacy issues, notably Brian's hammy attempts to get his mother to give him a hug (which has apparently resulted in Bellamy's character being the most misogynistic of the lot -- no hugs, no love) and let his little brother move out of the hold neighborhood and into Brian's tony flat. More interesting than the quartet's sporadic inter-gender sparring, however, are the game performances and genuinely affecting interaction between Powell and Jennifer Lewis as Jackson's parents. (Lewis had a terrific, utterly overlooked turn as the harried Shoveller's wife Lucille, in Kinka Usher's Mystery Men.) The emotional range of these two performers puts the hoodoo on their younger counterparts -- when they're on-screen the film takes a much-needed detour into a reality that rings truer than anything else in the picture. Despite the obviousness of his script, Hardwick directs the action with a competent hand, and rarely if ever sinks to outright comic shenanigans that would likely capsize the film's more serious romantic tone. There is a shoot-out -- of sorts -- in Brian's former 'hood, but for the most part Hardwick seems content to keep his characters on the straight and narrow, preferring to explore the tangled romantic subtexts that crowd the script like so many dancers in the after-hours clubs the quartet attend. It's an admirable, if clunky, attempt, and though it never quite jels in the way that, say, Waiting to Exhale did, it's good to know someone's making the effort to portray black urban males as something other than criminals or crime-fighters. 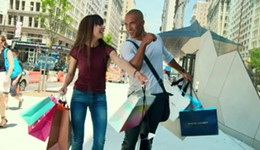 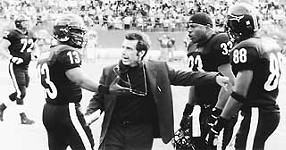 Any Given Sunday
Stone's tale of a professional football team is full of excess, machismo, and a ripped-out eyeball.