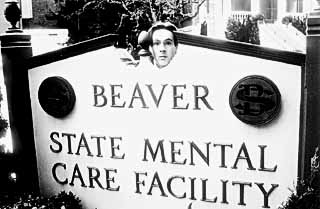 Say it Isn't So

Although the TV spots for Say It Isn't So practically demand that nonattentive viewers take note that the film is “from the makers of There's Something About Mary,” the Brothers Farrelly are involved only as producers. A more truthful line of type would say something like “from the first assistant director of American Pie and Me, Myself & Irene's Golfer No. 2.” This kind of creative log-rolling is surely nothing new -- what would the tagline copywriters do were it not for the phrase “from the makers of”? Rogers, seated in the director's chair for the first time, has obviously studied hard at the Farrelly brothers' craft. He's served in one capacity or another on all four of their major films and their peculiar brand of high-brow/low-brow yuks has seeped into his cinematic blood. Not enough, though. Setting aside the old (well, it sure feels old) argument about whether or not the Farrellys are directly responsible for the dumbing down of Western civilization, a couple of things emerge. First, while a Farrelly-directed comedy will almost certainly have scads of scatological humor, wheelchair jokes, and reams of foul-mouthed dialogue, there's also a deeply held romantic ideal at their core -- be it Kingpin, There's Something About Mary, or the aforementioned Irene. No matter how deeply the pratfalls sink toward the gutter, there's something intrinsically good-natured -- even sweet -- about their movies. Not so with Rogers' film, which adroitly assembles the skeletal framework the Farrellys use (every single one of their films is, in its own way, a road movie romance) but hangs all the wrong siding on it. It's a house of cards compared to the Farrellys' house of crap, and it topples under the barest scrutiny. Klein (American Pie) plays Gilly Noble, an amiably dim Indiana dogcatcher given to offering up final poetic prayers for his soon-to-be euthanized charges. Gilly's got a bowl haircut run amok (think Keanu in Bill & Ted's Excellent Adventure) and calling him slow on the draw would be a massive understatement. In short order, Gilly falls for local hairdresser Jo Wingfield (Graham), has his ear mangled by her in a tragic scissors accident, meets her scheming mother Valdine (Field) and stroke-victim dad (Jenkins), consummates the relationship (with Jo, not Valdine, although the idea has definite possibilities), and discovers that the pair of them are long-lost brother and sister. Or not. It's all a big scam by Valdine, apparently, to get Jo to marry her previous beau, millionaire stoner Jack Mitchelson (haw!). There's also a cross-country flight (to Beaver, Oregon -- haw!); 7-Up shill Orlando Jones as a legless, Jimi Hendrix-inspired pilot; and Gilly with his hand hopelessly lodged within a cow's backside. What more could you ask for? Well, how about some genuine wit, for one? To be fair, not all of the Farrellys' outlandish jokes connect -- their movies are littered with the remains of sad gags dying lonely deaths -- but far more of theirs connect than misfire, unlike Say It Isn't So, which seems to go not far enough and, ironically, way too far -- if such a thing is possible. It doesn't help matters that Graham and Klein have an onscreen chemistry somewhere on a par with Ruth Gordon and a ferret -- you know something's got to happen but your expectations are continually confounded. In the end it's a dull, unremarkable comedy of errata; it makes you realize just how smart the creators of Dumb & Dumber actually are. 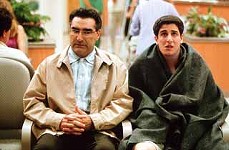 American Pie 2
As everyone knows, it just wouldn't be summer without a teen sex farce, and this randy sequel to Paul Weitz's 1999 smash fits the bill ...