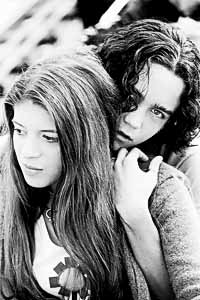 rollercoaster is like an afterschool special from hell, if hell were Canada and that pesky VD didn't get cleared up by the end of the hour. The film jackhammers out the gate as five teenagers pull into an empty parking lot, pile out of the station wagon (borrowed from a counselor at their group home), and proceed to kick the crap out of it. It's a violent, inexplicable moment, and much of what follows is the same: passionate but pretty stupid. Ain't it grand being 15 and disaffected? The five teens break into an abandoned amusement park for a renegade day of booze, pills, and general destruction. Quasi-spiritual Chloe is pregnant by tortured-yet-poetic Darren; Darren's little brother Justin, a talented artist, is silent and scowling; Stick is a hyperkinetic bully with a wicked sense of humor; and Sanj is, well, a superfluous character with little to do or say. Together, they con a security guard into turning on some of the rides for them, but not without a price (one that is disturbing but not at all surprising). Eventually the misfit teens steal the keys and lock the guard on one of the rides in perpetual, stomach-churning motion, thus crowning themselves kings of the park for a day. In the course of that day, a lot of dirty laundry is aired, more Jerry Springer than afterschool special: confused sexuality, promiscuity, molestation, drug & alcohol abuse, teen pregnancy, even a suicide pact. It reeks of melodrama (as adolescence usually does) and the script fails more often than not. Too many issues, dealt with too heavy a hand. In plot and in theme, the film calls to mind Kids, photographer Larry Clark's 1995 foray into the seedy, sickly world of urban teens with nothing better to do but sex and drugs. Although it boasts a conscience Kids never could, rollercoaster doesn't impress the same; ragged though it may have been, Clark's film at least stuck with you -- for weeks after, like grime under the nails that simply can't be gotten to. Where Kids roared, rollercoaster only mews, pitifully. However, rollercoaster has two very big things working for it (as did Kids): the photography and the cast of kids. The film is remarkably shot, and the deserted park provides a perfect melding of desolation and magic -- it's dirty and lifeless until the kids literally wake it from the dead, then it's a fantasy world colored with neon lights and carnival music. And the actors are dead-on in their depiction of that awkward, sticky phase of life. Actually, it's at times a little embarrassing to watch -- their melancholy stares into space and vaguely pathetic condemnations of society -- maybe because in years and in memory, I'm still relatively close to that age, where everything seems huge and mournful. (Granted, the abandoned teens here have it worse than your average suburban brat.) Still, you just want to shake these kids and tell them it really does get better. Particularly powerful is Stick (played by Fletcher, who's won numerous awards for the portrayal). He's a kid straight out of anyone's high school recollections: mean and cocksure and foolishly destructive. As the hours pass, Stick undergoes a tremendous transformation, and Fletcher expertly reveals the sensitivity and heartache underneath Stick's jackass veneer. None of the other kids are quite as impressive but they handle the material ably (especially the tight-lipped and sullen Glenen as the younger brother). First-time director (and writer) Scott Smith deserves praise for not ending this one all shiny happy, but it's just so damn predictable. rollercoaster is a well acted, well shot first effort, but just like adolescence, you've got to hope there's something better down the line.