The Spanish import Nico and Dani is that rarest of creatures: a coming-of-age dramedy whose (nearly) teenage stars are natural actors, whose direction is unforced, and whose sexual themes are treated with candor and humor. Stack it up against the bifurcated approach that Hollywood takes toward the carnal urges of teenage boys and girls -- the tone is either moralistic and dire (Larry Clark's Kids) or cynical and smutty (American Pie) -- and the film looks even more different. Then factor in one more variable: During an unsupervised summer vacation in which the titular buddies smoke weed, sleep late, and cruise chicks at the beach, they're also exploring their attraction to each other. Seventeen-year-old Dani (Ramallo) is the more self-aware of the two, craftily thwarting the double dates that Nico (Vilches) plans with two local girls (Orozco and Nubiola) and making clumsy overtures to Nico when the lights go down. Meanwhile, Dani strikes up a taboo friendship with a suave, much-older writer (Amado). Director Cesc Gay achieves a playful, easygoing tone even in moments that might otherwise turn ugly, as in a dinner-party sequence with the two teenage couples, both of whom look like little kids playing dress-up. (Little do the girls realize that Nico and Dani have spiked their sangria with Valium from the medicine cabinet.) Some reviewers have found fault with the moral implications of this scene, and not without reason -- it's troubling, and there are no consequences. Another scene of intimacy between the boys reportedly drew audible gasps from the audience at Cannes, but the worldly crowd of aGLIFF members at our screening seemed unshocked. Those caveats aside, Gay displays a facility in working with actors, and his script (co-written with Tomás Aragay from the stage play Krampack, by Jordi Sánchez) is appropriately character-driven. The film's appeal to a gay audience is virtually assured, but it also features a strong female ensemble; the girls will prove to be just as sexually pragmatic and assertive as the boys, and Dani's English tutor (Garcia) describes her own youthful fumblings with a gal pal. However, the standout is Vilches, a former circus performer who makes his film debut here. He's a fine discovery, with the goofy, hollow-chested aplomb of an authentic teenage slacker and a face that's neither dorky nor graceful -- yet is often both. The Mediterranean scenery, handsomely if predictably photographed by Andreu Rebês, complements the film's breezy feel, while periodic intertitles splice up the panorama and flavor it with a youthful edge. 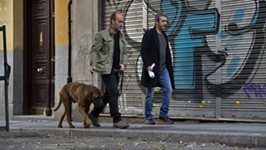