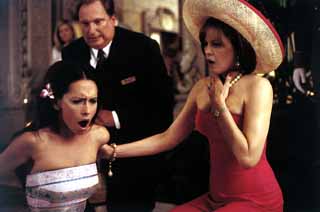 If you've always dreamed of seeing Gene Hackman stumble about the screen slathered with an overabundance of stage make-up, well-browned choppers, and a hacking, nearer-my-grave-to-thee cough, this, my friend, is your film. It's also not bad if you're a fan of Ms. Love Hewitt's ample bosom, or, for that matter, Ms. Weaver's comic skills, all of which conspire to make Heartbreakers a pleasant enough dark romp straight out of the Thirties tradition of grand screwball comedy. Mirkin, who directed the underrated Romy and Michelle's High School Reunion, combines elements of Dirty Rotten Scoundrels and The Grifters alongside a wealth of stock comic hijinks and gets surprising mileage out of some of the hoariest clichés in Hollywood. It certainly doesn't hurt matters that Weaver, Hewitt, and Bancroft are on board for the ride -- all three possess their share of comedy instincts, and although the script (by Robert Dunn and Paul Guay) is a ludicrous thing, the cast is having such a fine old time of it that you may as well sit back and enjoy the ride. Weaver and Hewitt play a mother and daughter con-artist team who bilk wealthy men out of their bank accounts with a clever wedding-night scam: Mom marries the stooge and then pretends to have had too much bubbly at the reception (thereby freeing her from any onerous consummation chores), while daughter cozies up to the groom and works it for all she's worth until mom reappears to catch the duo in a clinch. Instant divorce and settlement ensue and then it's on to the next town, mark, and moola. Things hit a snag after the duo bilk Ray Liotta's Joisey chop-shop hoodlum Dean and head to Palm Beach, ostensibly on the run from the IRS. Once there, they scam their way into the toniest digs in town and begin hunting for a new quarry. Hewitt is intent on bagging a local tech-stock playboy, but mom sets her sights on Hackman's hyper-phlegmatic tobacco scion William Tensy, whom they first spy collapsing on the deck of his beachfront manse in a wave of emphysemic spasms. Weaver affects the persona of a wealthy Russian expatriate (her version of “Back in the USSR” had me praying for the sudden appearance of an alien queen, but who knows, you may like it) and insinuates herself into the old fellow's good graces, while Hewitt, eager to strike out on her own, instead falls for the hunky, sardonic bar owner down the beach (Lee). Liotta's lovestruck Dean reappears at some point, as does former SNL regular Nora Dunn (as Hackman's stern hausfrau), though by that point you've either been taken by the film's obvious, silly charms or have long since fled the theatre. Heartbreakers is anything but subtle and therein lies the fun. It's clear from the outset (at the point we get to see Weaver -- in a shockingly tight lace negligee-catsuit-something-or-other that's light years from Lt. Ripley's plain white panties-and-cat ensemble -- seduce poor schmuck Liotta) that the filmmakers are going for over-the-top yuks, and that's what makes Mirkin's film work as well as it does. Hackman is clearly having a ball playing this slimy, hacking relic, and even Hewitt, an actress I've never quite been able to figure out, maintains a cool, chippie's glee throughout. Jason Lee fares not as well, relegated to a bland nice-guy role, and folkie Shawn Colvin makes a cameo as a wedding officiant (and scores a couple of songs on the soundtrack to boot). It's an obvious effort through and through, but that doesn't seem to dampen its ridiculous charm one bit. 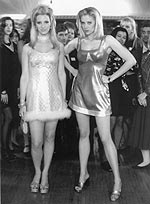