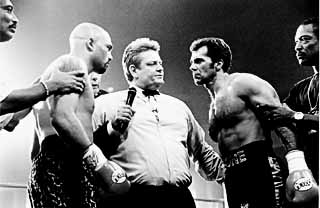 Talk about your niche marketing … Christian filmmaking seems to be all the rage these days -- or at least it looks that way from deep down here in the Bible Belt. The latest to hit Austin is Carman: The Champion, produced and released by TBN Films and 8X Entertainment, the company behind the grassroots marketing success of 1999's The Omega Code. Banking on the popularity of gospel singer Carman in the starring role and a savvy church-pew and Web marketing campaign, Carman: The Champion is targeting its audience with the force of an itinerant preacher looking for a sinner. The story features Carman (hunky in kind of an icky David Hasselhoff way) as a retired cruiserweight champion-turned-preacher who is connived back into the ring in order to save his father's dream of creating an inner-city youth center. You've seen it all before: the troubled kid at the youth center, his love-interest mom (although it's good, I suppose, to learn that Christian filmmakers are as adept as any heathen when it comes to exploiting female cleavage), the backsliding brother, and the death-defying exploits in the ring. It's the same-old, same-old, only this time with a touch of Jesus larded into the background. Christian filmmaking has entered a new phase in which its creators have discovered how to soft-pedal their message under wraps of a conventional story. The Omega Code attempted science fiction, Road to Redemption was an on-the-lam road trip, and Left Behind went for the futuristic action-thriller model. And the approach seems to be working, if the number of releases is any indication. Carman: The Champion is minimally adequate in classical film terms, however. It no doubt has more pull among those not steeped in movie conventions, perhaps due to the irreligious nature of so much of our popular entertainment. It's logical that Christian evangelism would take to the silver screen, and the movement is now entering a fascinating stage as the preachers head to the back of the auditorium and let the storytellers lead the congregation. After all, they have at their disposal the “greatest story ever told.”