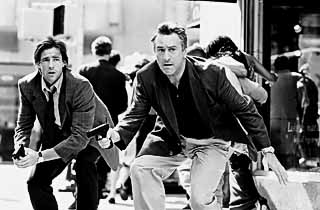 Emil and Oleg are a pair of Eastern European immigrants who just want their shot at the American Dream. Emil (Roden) is a wiry Czech with a shorn scalp and jitterbug eyes. Oleg (Taktarov) is a heavy-set Russian with stars in his eyes and biceps the size of honeydew melons. When Oleg, fresh off the plane at JFK, steps up to the official behind the customs desk, he identifies himself as Frank Capra while Emil sweats and scowls. Oleg is movie-mad and relates the halting and heartfelt story of how in his hometown the only entertainment was Hollywood imports. The stocky Russian's past, you think, is likely ash and cordite, but at least he has celluloid dreams. The pair have arrived in New York City to secure their end of a shady financial transaction -- something criminal and vague -- and on the way to meet with their former partner and bag-man, Oleg casually palms a mini-DV video camera from one of the many electronics outlets that crowd the Manhattan sidewalks. He immediately begins filming in the cab as the pair speed toward their appointment with their old friend, who, as it turns out, has spent the dough and has nothing to offer them now except, perhaps, an introduction to his plumbing business. Unappeased, Emil murders the man and his girlfriend while Oleg rolls tape and narrates the action. When the pair discern a possible witness (Farmiga), they set out in search of her, camera in tow. It's here that NYPD's finest, Detective and media superstar Eddie Flemming (De Niro) enters the fray, along with Jordy Warsaw (Burns), an intuitive NYFD arson investigator. These two smell a rat (Warsaw actually smells a timing device, but the two scents are apparently not dissimilar) and embark on the sort of interdepartmental brinkmanship that Oleg would doubtless recognize from countless previous Hollywood incarnations. At some point, with Flemming and Warsaw hot on their trail, Emil decides that he will allow himself to be caught, declared insane, and then, once Bellevue-bound, renege on the insanity plea, thereby gaining his freedom on the basis of the nation's double jeopardy protection. It's a sly gambit, and one that is only made the more distasteful by the presence of veteran news weasel Robert Hawkins (Grammer), whose tabloid television program Top Story is exactly the sort of exercise in gambogian journalism that Emil requires to make his plan pay off. Director John Herzfeld's last film was 1995's 2 Days in the Valley. Since then, it's clear he hasn't been enrolled in subtlety school. 15 Minutes is such a sweeping broadside on the cult of celebrity and America's infatuation with all things mediacentric that by the time it's over you feel as though you'd rather switch places with Oleg and head back over to the Old Country, where Maury, Geraldo, and the rest are thankfully absent and all one has to do is invest in a witty, cinematically relevant nickname like “Frank Capra” and go to the Bijou now and again. Herzfeld also wrote the screenplay, and so its leaden and obvious tone and the resulting dearth of delicacy rests squarely on him. That the film seeks to generate rational discourse on the pros and cons (mostly cons) of those Warholian 15 minutes while at the same time entertaining its audience is an ambitious and noble undertaking. The fact that it resorts to vacuous shenanigans such as snuff films and fusillades of winking irony to make its already apparent points is simply annoying.