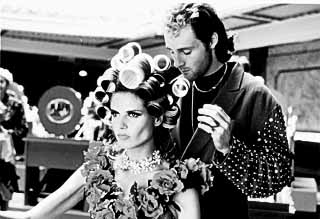 As one whose mane has, frankly, seen better days, this seriocomic romp through the stylist subculture of professional British hairdressers falls flat, and not just because I'm using Irish Spring as a conditioner. Touted as having been penned by “the writer of The Full Monty,” Breathnach's film is clearly seeking to replicate the success of both that film and the director's Irish hit I Went Down. But where those films managed to tread the fine line between working-class pathos and outright yuks, Blow Dry is a limp and lackluster affair that telegraphs its feel-good smarm miles in advance. Rickman plays golden barber-with-a-past Phil, who makes his home in the British backwater of Keighley, to which he has retired from London after his wife and model Shelley (Richardson) left him for gal-pal Sandra (Griffiths) years before. When Keighley is chosen to host the annual British Hair Championships, Phil must face the larger issues of whether or not to reconcile and thereby save the coveted Silver Scissors Award from the clutches of his old preening nemesis Ray (Nighy). Phil's son Brian (Hartnett, nicely maintaining a vaguely Cockney accent throughout) is all for it, especially when he falls for Ray's American daughter/model Christina (Cook), whose own skills with the shears are revealed to be something less-than-stellar. Add to this mix the fact that Shelley is suffering from an inoperable and increasingly painful tumor, and you have the makings of a tear-jerker almost guaranteed to crack the hardest heart. Almost. Whereas small-town British comedies such as The Full Monty are, at least in comparison to Blow Dry, somewhat subtler offerings, Breathnach packs his film with so many catty asides and cartoonish depictions of conceited, wild hairdressers that, half the time, it feels like a mean-spirited broadside. Rickman, a terrific actor who, although having pulled off playing both comedy and sublime menace in the past, seems lost here, unsure whether to play up the role's inherent misery (with his battered, reptilian face, he looks like a man badly in need of a stiff drink by a roaring fireplace) or go for the laughs. It's difficult to have it both ways, and Simon Beaufoy's script doesn't help matters by, uh, cutting between the backhanded shenanigans behind the scenes (political intrigue has nothing on the world of professional stylists, obviously) and the sorrow and pity taking place on Phil's home front. Buoyed, somewhat, by the sort of soundtrack that includes both Billy Ocean and the Climax Blues Band(!), Blow Dry starts with a ripe conceit and then tumbles downhill, all quick clips and soggy tissues. To their credit, both Cook and Hartnett come off nicely as the embattled offspring, but that's not anywhere near enough to save Breathnach's film from being a wildly unclever bit of fluff. Lather, rinse, do not repeat.