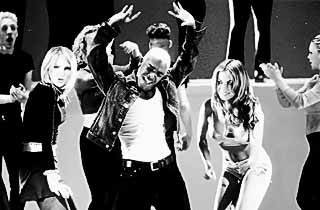 Hey, get this! It's another broken hearts & bubblegum teen flick! Based on Shakespeare! Featuring a TRL mainstay! Still reading? Then you probably fall into one of three categories: 1) You're a bubblegum popper yourself and are frothing at the bit to know which TRL troubadour it is; 2) your Hubba-Bubba days are long gone but you're wondering just what TRL is; or 3) you're fully versed in MTV speak, but what you really want to know is why a once-respectable arthouse outfit like Miramax can't seem to put out anything these days that isn't asinine teen schmaltz or deeply sensitive, lushly shot adult schmaltz. If you fall into groups one or two, you might as well stop reading now -- either you've already bought the ticket and the Top 40 soundtrack to boot, or you're too far from high school for this teen pop-culture parade to mean much of anything, and besides, isn't Chocolat still playing? So that leaves the rest of you, whose cinematic snob odometers are no doubt going into overdrive by now. My advice to you? Get over it. Despite the generic packaging of this film, what's inside is an altogether different beast. So it's about this nice boy, Berke, who gets dumped by a girl, who falls for this Eurotrash boyband casualty. And then there's this other girl, Kelly, who's really nice, and she's in love with Berke, who likes her, but doesn't like like her, but Kelly's played by Kirsten Dunst, so we know she must be our heroine. And all these moonstruck kids are in a play, which happens to be the disco-decked out musicalization of A Midsummer Night's Dream. There's not a whole lot of originality to the plot or any real suspense as to who's going to end up with who (nice always attracts nice) … but what is suspenseful, what is truly edge-of-the-seat-in-keen-anticipation about this film is what the hell kind of warped, whacked-out shit's gonna come shuffling across the screen next. Or high-kicking, as the case may be; there's a musical number within the first three minutes, with a chorus of singing and swinging UPS truck drivers, a bridal party, and pop sensation Vitamin C. And it's got Sisqó, the purveyor of thong, doing an elfin-stanced, toga-clad moonwalk across an auditorium stage. Oooh, and Ed Begley Jr., as a faux-hip sex talk show host marveling “dope!” at the Sisqó kid. Dope's right, Ed. Get Over It is so relentlessly, gleefully dumb -- without being the slightest bit sardonic -- that you just can't help but guffaw … or groan … but probably both. There's also a pretty sweet love story going down between two appealing kids (Dunst and Foster, who looks to be all of 14 and does a mean deadpan -- hallelujah, no Freddie Prinze mugging in sight!) And don't get me started on the truly lovely fantasy sequences throughout (set in the Midsummer dream world and shot by veteran indie lenser Maryse Alberti) that's part Botticelli-beauty, part foul-mouthed faeries wreaking havoc with their pixie dust. The only conclusion I can come to is that the filmmakers (director O'Haver and Texan scribe R. Lee Fleming Jr.) must have been smoking some of that same faerie dust. Yeah, well, toke it up, boys. This one's going down in my teen hall of fame. 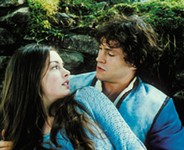