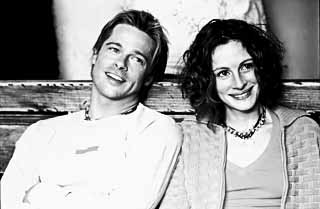 Despite its good-natured charm and relationship-related gymnastics, The Mexican clearly celebrates its pedigree from Quentin Tarantino producer Lawrence Bender: There's all manner of bloody mayhem strewn along the side of the road to Real de Catorce, the Mexican villa to which bumbling Jerry (Pitt) has been sent by boss (Balaban) to secure a famously dangerous antique firearm known only as “the Mexican.” Jerry's on-again, off-again search for the gun is played out against the much broader (and more interesting) palette of his crumbling love affair with longtime girlfriend Samantha (Roberts), a woman so caught up in the mythology of self-help books (we catch a glimpse of her poring over Men Who Can't Love, among others) that she refers to Jerry in the histrionic tones of a shrieking harpy, calling him a “blame shifter” when alluding to the downfall of their relationship. The Mexican opens with Jerry's belongings being tossed out of the window of the apartment he shares with Sam as she rails against his inability to commit, to forge ahead in their blundering relationship, to grow. What Sam doesn't realize is that if Jerry doesn't go on this one, final job for his bosses he's a dead man. And so it's off to Mexico for the Spanish-impaired Jerry, and off to Vegas, self-help books in tow, for Sam. The situation is complicated nicely when the thuggish Leroy (Gandolfini, riffing on his role in The Sopranos), kidnaps Sam as insurance against Jerry's ham-fisted handling of the job in question, and holes up with her in a Vegas casino. Cross and double-crosses abound in The Mexican -- the film is nothing if not self-reflexive -- and this provides much of the forward momentum of the plot. Jerry gets hold of the gun, loses it, regains it, over and over again, with disastrous results, but what really makes this edgy love story (make no mistake, this is a love story at the heart of it all) work as surprisingly well as it does is the hamstrung romance between Jerry and Sam, a pair of wannabe lovers desperate to commit but unable to rely on their own emotions and abilities. I admit there was a time when I regarded Pitt as little more than another grinning Hollywood pretty boy; his recent turns in such films as Snatch and Fight Club have changed my mind abruptly, and in The Mexican his role as Jerry -- all frustrated tantrums and benevolent charm -- seals his fate as an actor who can take the most obvious of cinematic turns and infuse it with pure agitated adrenaline. There's even something in The Mexican of his turn as the deluded, manic Jeffrey Goines of 12 Monkeys -- Jeffrey's prone to tripping over his own tongue when the situation perplexes him, as if too often does here, and his love affair with Sam only deepens his jittery panache. The Mexican is also notable for a brace of supporting roles such as J.K. Simmons (of HBO's Oz), who appears as Jerry's sometime-savior, and, of course, Gandolfini, an actor whose sizable onscreen presence belies the wealth of skill (and menace) gurgling beneath every role he finds himself in. Without giving too much away, Gandolfini's turn here is awash in surprises; without him it's doubtful that Roberts -- who turns in one of the best characterizations of her career here -- could have succeeded as well as she has. Verbinski, who directed the equally manic Mouse Hunt, also for DreamWorks, is fond of stylistic trickery such as sepia-toned flashbacks that reveal the history of the Mexican. Plenty of killings abound, nevertheless the film is a masterful -- albeit warped -- love-story-cum-road-movie that revolves around three of the most invigorating performances of the year.