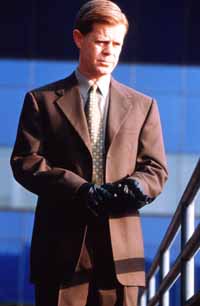 Panic is not exactly the kind of emotion one associates with the roles typically played by William H. Macy, he of the hangdog looks and the slowly imploding temperament. But as a man going through an unusual mid-life crisis in this superlative little film, Macy keeps his emotions on an edgy simmer until all hell finally breaks loose with the fury of a classic Greek tragedy. Macy is at the top of his game here, as are all the other actors, and together they raise the stakes of this sharply written black comedy-cum-tragedy. Macy plays Alex, a man at a personal and professional crossroads, who decides to seek the services of a therapist. He's married (Tracey Ullman plays his wife) and has a young son whom he adores (played with just enough whimsy and zero saccharine by David Dorfman). Professionally, he runs a mail-order business from his house, but also works with his father (Sutherland, in one of his very best performances) in the family business. Here's where his difficulties begin. Their line of work is to kill people for a living. Dad takes the orders and Alex executes the job, so to speak. Alex can't tell his wife about his work, so communication has become more and more difficult. And he would really like to quit working for his father but fears his wrath. Then, to further complicate things, he meets a young woman (Campbell) in his therapist's waiting room, whose manic unpredictability he finds compellingly intriguing. I know -- I hear you saying that these “hitman comedies” have become all too common of late, what with The Sopranos, Analyze This, and dozens of lesser film and TV takeoffs. But it's not always what you do but how you do it, and Panic does it with intelligence, craftsmanship, and sly wit. Writer-director Henry Bromell (an award-winning novelist, who has also written for TV's Northern Exposure, I'll Fly Away, Chicago Hope, and Homicide: Life on the Street) has created a great set of characters and provided them with smart dialogue, which this acting ensemble has embraced as their own flesh and blood. Panic is his first feature-length film and his visual aesthetics are still developing, and some of the narrative patterns seem too geared to hour-long resolutions. Very dark elements transpire, however, as we begin to see how Alex's father molded his son into becoming the type of man he is (an unforgettable scene shows a flashback of the father teaching his son to shoot a squirrel), and Alex finally panics when he sees that his father has also sets his sights on his grandson eventually joining the family business. Some viewers may have been fortunate enough to catch Panic when it played on cable in mid-2000. Its belated theatrical release is something of a story in itself. Following a wildly successful debut at Sundance 2000, the distributor (Artisan, which has made a name for itself successfully handling offbeat material like The Blair Witch Project and Requiem for a Dream) got cold feet following one disappointing test screening and sold it off to cable. Now with a new distributor in tow (Roxie Releasing), Panic will hopefully find the audience it deserves. 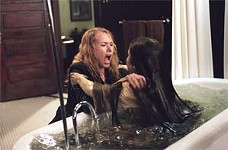 The Ring Two
Narrative listlessness and a lack of scares makes this mother-and-son reunion a shabby affair.