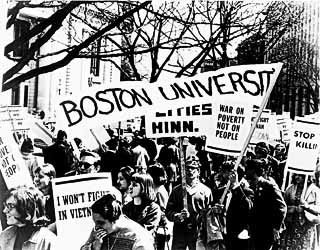 Rebels With a Cause

“It isn't the rebels that cause the troubles of the world, it's the troubles that cause the rebels,” runs a quote from former Students for a Democratic Society member Daniel Oglesby during Rebels with a Cause's opening credits. Then director Garvy, herself a former SDSer, tells us “this is our story.” Right there you know objectivity has little to do with what you're about to see. Garvy also appears on camera, a typhoon of white hair rising from her head, her face lined with roadmaps to the Movement. In any other historical documentary, this sort of onscreen involvement from the filmmaker might be taken as outright bias, but while Rebels is clearly the work of one of its own subjects, the wealth of both information and passion (there's a fair amount of frothing at the mouth on display) lets Garvy and the 20-plus other interviewees off the hook. At the very least, Garvy covers all her bases, grounding the story of the SDS in a solid explanation of America in the early Sixties. What makes Rebels so compelling is Garvy's effusive on-camera subjects, who range from countercultural hero and University of Michigan “agitator” Tom Hayden to former SDS president Alan Haber, and from Harvard's Mike Spiegel to the University of Texas at Austin's Alice Embree and Jeff Shero Nightbyrd, who, along with proto-feminist Casey Hayden, were among SDS's initial Texas (and national) organizers. Garvy tracks SDS from its birth in the wake of the Greensboro, North Carolina, sit-ins in February 1960 through the drafting of the group's “Port Huron Statement” in 1962 and on through their involvement in the civil rights struggle of the Sixties to the emergence of the Vietnam conflict, which would eventually become the group's undoing. Initially, SDS sought not only to secure voting rights for Southern blacks but to organize the poor, both north and south of the Mason-Dixon line. To that end they packed off members in cars to various cities and literally trouped door-to-door, day and night, talking to the disenfranchised and slowly gaining a groundswell of support for their activities. (One former SDS member recalls the difficulty he had recruiting at, of all places, Texas Tech University; he ended up scrawling the SDS name on a placard, affixing it to a stick, and then sitting on the ground next to it until enough curious students asked what was up and he secured a place to stay for the night.) One of the most passionate moments comes when former SDS National Secretary Mike Spiegel describes how his formerly hawkish political outlook was forever shattered by the realization that his university chemistry lab was searching for a way to better defoliate the rain canopies of Indochina -- he promptly quit school and went on to become one of the movement's most eloquent speakers. The barrage of information in Rebels is at times wearying; indeed many of the speakers look somewhat battle-weary, but there's clearly still a holy fire burning deep within their now-hooded eyes. Garvy relies on talking heads (set against a background of SDS-era slogans) a tad too much. Intercut with brief scenes of period newsreel and television footage, Rebels drags at times. But like the movement it portrays, Rebels' DIY dynamic -- and after all, “do-it-yourself” is the message at the heart of the film -- is exhilarating. From a contemporary perspective it brings to mind the (much smaller) grassroots attempts at organizing around social problems by punk-rock-borne groups such at the Better Youth Organization and Washington, D.C.'s Positive Force -- which just goes to show you can't keep a good rebel down. (Director Helen Garvey will attend Friday's opening-night screenings.)

Rebels With a Cause, Helen Garvy