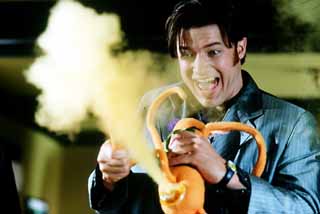 Monkeybone's premise -- an artist thrust into the midst of his own art -- isn't the most original gig around, but Kaja Blackley's graphic novel Dark Town, the basis of this film, handled it well. This film version does less so, ratcheting down Blackley's Freudian tale of a puppeteer lost amongst his creations to the level of a colorful, manic, kids' film, albeit one with a surfeit of psycho-sexual overtones and the titular farting simian. Fraser, one of the best physical comedians working today, at first seems a natural to play Stu Miley, a shy, sensitive comic book artist who has an oversized hit on his hands with the title character, a libidinous primate voiced by Turturro. Pressed to market his obnoxious alter-ego to the hilt by his manager (News Radio's Foley), Miley hesitates; his mind is more on the engagement ring in his pocket, and his true love Julie (Fonda), a sleep-disorder psychiatrist who has brought him to a new and contented plateau in life. Stu's peace on earth is shattered, however, when he suffers a blow to the head and ends up not only in a coma, but in Downtown, the subconscious land of nightmares. Here he finds the real (though animated) Monkeybone swilling IV gin and performing in a nightclub populated by other comatose minds and ruled over by Hypnos (Esposito), the god of dreams, and a gaggle of outlandish phantasms. From this intriguing opening, the film quickly falls prey to convoluted plotting (Hypnos and Monkeybone scheme to steal Stu's body and create a world of waking nightmares, Stu's sister plans to turn off his life support, and Chris Kattan arrives in the final act as a reanimated gymnast) and a rash of juvenile humor revolving around monkey sex and Whoopi Goldberg (as Death, no less). There's the kernel of a brilliant psychoanalytic dark comedy lying amidst the comic debris of Monkeybone, but screenwriter Sam Hamm ( Batman) and director Selick (Tim Burton's The Nightmare Before Christmas) are at a loss to bring it to fruition. More than anything else, Monkeybone feels like a movie lost in a tide of brilliant, unrealized ideas -- too many of them, perhaps. The concept of the artist trapped in the art, and more specifically of the comic-book artist, was already dated when Ralph Bakshi strip-mined it for his 1992 clunker Cool World. Alas, the closest we get to Kim Basinger's Holli Would (or Jessica Rabbit, for that matter) is Rose McGowan as a bewhiskered pussy cat named Kitty who nonetheless makes the most of a woefully underwritten role. There's a wealth of similarly underdone characters here, from Stu's barely glossed-over background to his cut-and-paste sister Clarissa, and from Goldberg's barely tolerable Death to Foley's annoying Yes Man Herb. Hamm's script feels hastily written, or, more likely, hastily rewritten. The few gags that work -- once in Stu's body, Monkeybone appears wearing a Lloyd Llewellyn T-shirt, a nod to Daniel Clowes' existentialist cult comic book -- are castaways in a sea of juvenilia. Even a brief cameo by Austin's Internet film guru Harry Knowles can't save the film from its muddled tone and frantic pacing. Selick is widely and rightly regarded as a master of surreal, dark humor, and wildly inventive animation technique, and Monkeybone is the first tarnish on his otherwise spotless reputation. Better to swing by the video store and pick up James and the Giant Peach one more time. 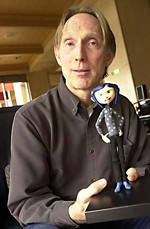 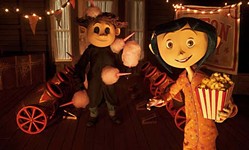 James and the Giant Peach
In bringing Roald Dahl's book to the screen, the filmmakers have preserved the author's diminutive, fantastic perspective and created a vision of childlike wonder and terror.