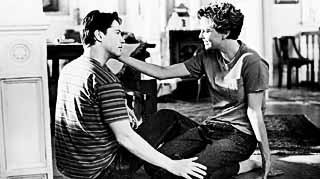 Get out your handkerchiefs. No, scratch that -- get out a pair of windshield wipers and staple them to your brow. Perhaps they'll obscure the screen. Writing this, as I do, on the eve of the most romantic holiday in the Hallmark realm, I feel a bit of a heel when I say to you that preprocessed pap of this sort ought to make true romantics rise up and replace Cupid's quiver with a Sig Sauer 9mm pistol, but there you go. It's true. Doomed romance as packaged as this, with musical cues (from Enya, no less) spot-welded to the soundtrack to assist the gushing of the audience's waterworks, is a slap in the face to the heartsick everywhere. Barely to the level of General Hospital, this time out Irish director O'Connor (Inventing the Abbotts) has managed a generic weeper that nonetheless had the audience at the advance screening I attended snuffling up a gobby storm by the film's rankly obvious conclusion. Sadly, I had no spare Puffs on my person, and instead satisfied myself with the occasional irritated grin. What a callous cad I must be. Well, no, actually, my fondness for three-Kleenex love stories is well known. I count both James Robinson's wonderful Still Breathing and Richard Quine's magical Bell, Book, and Candle -- two of the most sniffly romantic escapades I've ever seen -- as among my favorite films of all time, and god help me, I even fell for Sleepless in Seattle. See, I'm not such a bad guy after all. Which is why O'Connor's by-the-numbers yawn-a-thon irks me so much. True romantic films need no assist from Enya or anyone else; the stories, however bittersweet, carry themselves. Not so with Sweet November, which posits the age-old story of an insensitive male redeemed by an angelic woman, who may or may not be on her last legs. Warner Bros. has been coy in its trailers for Sweet November, but I think I'm giving nothing away when I say that true love is always boosted by chronic illness. Tempus fugit and all that. Here, Reeves plays San Francisco advertising wonderboy Nelson Moss (not to be confused with The Simpsons' resident bully Nelson Munce, though the two do bear several striking emotional similarities), who, in one day, loses his job, his girlfriend, and meets Sara Deever (Theron), a mysterious Potero Hill hippie chick who offers to change his life for the better if he will only give her 30 days to do it in. Initially resistant, Nelson eventually gives in, and before you can say, “Why does this man have 12 televisions?” he's frolicking on the beach, loving puppies, and making buddies with the chipper tyke next door. Why, exactly, the previously guarded Nelson has allowed himself into this bizarre situation (even for San Francisco it's bizarre) is glossed over like so much unnecessary backstory. As is much of the film. Through Sara, Nelson meets a variety of oddball characters, including the best in a bad batch, Jason Isaacs (The Patriot) as Sara's guardian angel. There's not a whiff of originality in O'Connor's film, relentlessly cheery though it may be. This may have something to do with the film being a remake of a 1968 film of the same title (which I haven't seen). This new version reeks of late Sixties chirpiness, though unleashing a chirpy Keanu Reeves on the world is hardly my idea of a love note to the audience. Reeves and Theron have shared the screen before, to good effect, in The Devil's Advocate, but there they had Al Pacino's fiery, whacked-out Satan to contend with. Here all they have is each other, and a puppy or two, and you can only wish for some diabolic intervention. It never comes, and we're left with the image of Reeves walking around in a blindfold and no one within striking distance.