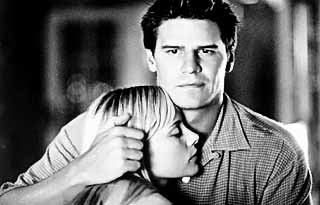 I miss the early Eighties, I really do. And I'll give you five reasons why: Friday the 13th, My Bloody Valentine, Prom Night, The Funhouse, and Happy Birthday to Me. Any one of these old-school slasher flicks is decapitated head and shoulders above the flimsy and flaccid shenanigans going on in Valentine -- and that's taking into account that precious few of those oldies-but-baddies aspired to do much more than act as psychic levers for getting Guy A's hand under Girl B's shirt while spilling stale popcorn in the back row. Those films -- when viewed sans the crimson-tinted glasses of millennial nostalgia -- were essentially grade-Z misogynist fantasies for pubescent male wallflowers to sink their testosterone-addled teeth into. Their continued production at the time was chiefly (and cheaply) attributed to their unflagging ability to fill weekend theatre seats with the precious teen demographic. Simple. But after I sat through the tepid Valentine, a self-styled modern slasher flick whose lineage obviously dates back to its early Eighties forerunners, films like the genuinely warped Charles Kaufman film Mother's Day began to look a lot more interesting, if not entirely palatable. Valentine's director, Jamie Blanks, is also responsible for 1998's equally trite Urban Legend -- itself a blatant steal from the Friday the 13th series -- which serves as fair warning to genre fans looking for a modern American slasher flick that isn't, like the Scream films, overly self-referential, or debased by the Wayans brothers à la Scary Movie. It's almost as though our cultural climate of post-Seinfeld meta-irony has entirely precluded the possibility of a real scary movie, much less one that can hearken back to the bad old days of Jason, Freddy, and their razored ilk. If the cyclical nature of exploitation films holds true, with horror and related genres rising to the fore during conservative political climates, then maybe, just maybe, the huddled masses of Fangoria fans yearning to bleed free are in for a treat. Valentine isn't it, however. The story -- hackneyed in 1980 and now so unoriginal as to be a grade-school screenwriting template -- revolves around a masked killer who, way back when, was rudely left unchosen and dateless for his junior high school dance by a quartet of pre-pubescent super-vixens-in-training. Prefacing the film with a scene lifted straight from Carrie, Blanks moves forward to modern San Francisco (looking suspiciously like Vancouver) where the same four girls begin receiving valentine cards inscribed with ominous messages. There's Kate (Shelton), Dorothy (Capshaw), Lily (Caulfield), and Paige (Richards), and before you can flee to the exit to rent Maniac Cop they begin dying in predictable ways. There's not much more to tell, really, except, perhaps, that Boreanaz (the Fox network's vampiric Angel) makes an appearance as sodden boyfriend Adam, and quickly becomes one in a series of senseless red herrings. Valentine, with its asinine dialogue, plodding killer (“Shuffle! Shuffle like the wind!”), and astounding lack of both adequate gore and heaving, unclothed bosoms, is perhaps the laziest slasher film I've ever seen. That's saying a lot. Relentless in its pursuit of suspenseless mediocrity, Valentine succeeds only in boring you to death, the most horrifying fate of all.