The House of Mirth

Many aspects of Edith Wharton's turn-of-the-century New York can be glimpsed in writer and director Terence Davies' new screen adaptation of her novel, but to say that his movie brings these aspects to life would be a mischaracterization of the work. The House of Mirth captures the anaerobic milieu and spirit of New York's social elite as they fuss over appearances and money. Davies (Distant Voices, Still Lives) paints this world with a dark and gloomy palette and treats the characters with an ascetic touch, allowing them few expressions or interior insights. Set in 1905, The House of Mirth tells the story of two years in the life of Lily Bart (Anderson), a young socialite at the height of her charms who becomes caught in an inevitable downward spiral brought on by the fickle rewards of trying to play by society's rules. Seeking to marry a wealthy man, Lily passes up the opportunity for a loving relationship with her greatest admirer, Lawrence Selden (Stoltz), an impecunious lawyer. While obliging her “dangerous” friend Bertha Dorset (Linney) by indirectly helping her carry on an illicit affair, Lily gets trapped in a scandalous backlash that assumes that she -- rather than Bertha -- is having an affair with a married man. From there, Lily's descent from society is rapid and increasingly harsh, assuming the kind of sad progression that reminds one of a Zola or Dreiser heroine. Wharton's sharp dialogue brightens Davies' film exercise, often providing an incisive commentary on the author's views of women's constrained options within the post-Victorian world and of the fatuousness of social conventions and expectations. However, viewers unfamiliar with Wharton's novel may have a hard time, especially at first, deciphering all the characters since Davies presents them at a steady clip while providing little background or explanatory material. Additionally, the novel conveys a great deal of information regarding the workings of Lily's mind, but the movie not only eschews the use of a voiceover but also impedes our clear understanding of motivations by restricting the actors' facial expressions and honest reactions. Never an actress gifted with great range, Anderson seems especially hindered by these tone-it-down directives. Other actors, like the usually free-ranging Dan Aykroyd and Eric Stoltz, seem simply miscast, especially when an actor like Laura Linney comes along and gaily seizes hold of her character's treachery. That Davies chose Anderson to star in his movie for her resemblance to a subject of a John Singer Sargent painting with no prior knowledge whatsoever of her acting output says a lot about where his adaptation of The House of Mirth is coming from. In a cover story on Terence Davies in the current Film Comment, Graham Fuller refers to him as “the acknowledged master of the tableau.” Maybe so. Just keep in mind, however, that what we're talking about here could hardly be described as a tableau vivant. 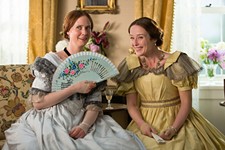 A Quiet Passion
A biographical sketch of poet Emily Dickinson 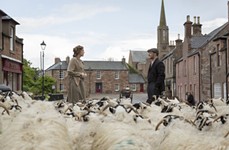