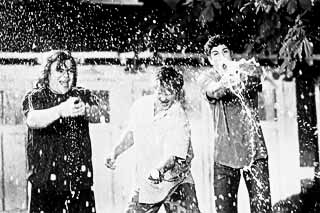 If your life won't be complete until you get to see the naked backsides of both crusty R. Lee Ermey and not-crusty-enough Steve Zahn in a major motion picture, your day has finally arrived, my friend. If that's not you, feel free to skip the latest from the director who brought us Beverly Hills Ninja and the inexplicably popular Big Daddy. Ninja doesn't bear mentioning, but Dugan's sophomoric handling of Big Daddy was given a leg up by the popularity of star Adam Sandler, who occasionally manages to rise above even the lamest material to create something of a knucklehead's paradise. You may not want to sit next to Sandler on the bus, but you have to admit he's a wacky guy. Tough break for us, then, that he's nowhere to be found in Saving Silverman, which instead relies on the comic chops of American Pie's Biggs. His ginchy, bar-mitzvah boy face is perfectly suited to this sort of light comic vehicle, but Saving Silverman gives the poor mensch nothing to work with. It's as if the script (by Hank Nelken and Greg DePaul) was constructed from leftover material from better, funnier films. Jerry-rigging comic detritus into a workable idea is not the way to go, fellas. What boggles the mind about Silverman isn't the remarkably shoddy writing -- I feared that already -- it's that even Jack Black (High Fidelity, Tenacious D) and Steve Zahn (Out of Sight, subUrbia) can't get a laugh. These are two of the most inspired comic voices working today, regularly soaring miles above everyone else in terms of their edgy-comedy pedigrees, and they wander through this film as though they were parolees from some bizarre Jerry Lewis comedy wasteland. Amanda Peet, easy on the eyes and light on her comic feet, is equally wasted, reduced to such a broad parody of über-bitch that the role quickly becomes more annoying than entertaining (it's certainly not funny, although she did get virtually the only laughs in the screening I attended). The story is this: Darren Silverman, Wayne, and J.D. (Biggs, Zahn, and Black), best friends since kidhood, find their Three Musketeer act threatened by new arrival Judith (Peet), who latches on to Darren like some sexy, kick-boxing succubus and demands that he break from his previous slobby-guy ways. Shy and flattered that such a lively looker could even consider him worth her time, he hesitantly acquiesces, under the pressure of “no more sex” (actually not even that). The fact that this almost-instant surrender ought to make Darren a completely unlikable (not to mention pathetic) wuss in the eyes of every male in the audience is glossed over with silly situations and poorly scripted jokes. When Wayne and J.D. conspire to kidnap Judith and thus win back their friend, they come off as the most sympathetic characters in a bad bunch. Their Animal House stylings (Black is particularly Belushi-esque) are funny in the way that guys like this in real life are funny. I've know guys like this -- at one time or another I've been guys like this -- and believe me, broken La-Z-Boys can be an endless source of humor. But not for 95-plus minutes. Filled with the sort of humor that made Dude, Where's My Car? an almost emetic cinematic experience, Silverman reaches toward new heights of comic laziness and succeeds beyond anyone's wildest expectations.