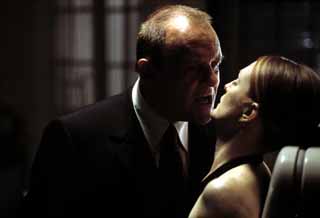 It walks like Hannibal Lecter. It talks like Hannibal Lecter. But it sure doesn't taste like Hannibal Lecter. This sequel to the wildly popular The Silence of the Lambs arrives 10 years, almost to the day, after its predecessor, and indeed picks up the characters of Lecter and Clarice Starling 10 years after their initial meeting. Hopkins sinks his teeth into this reprisal of the gentleman monster, and Moore offers up her best Jodie Foster impression as FBI agent Starling. However, the script (first adapted from Thomas Harris' novel by David Mamet and then Steven Zaillian) gives these two little to do -- and even less with which they might impress us. It's not even until the last act that the movie hooks these two up, person-to-person, for some interaction that doesn't require a phone cord or a computer screen. It's partly in this structure that the movie fails. In both previous film incarnations (Manhunter and The Silence of the Lambs) Hannibal the Cannibal is already jailed, and rather than being the story's “hunted” he serves to advise law officers in tracking other serial murderers. In Hannibal, Lecter is free and hiding out in Florence, Italy, where he's recently emerged in a new above-ground guise and is hungering for his old ways. He is now the story's sole villain -- unless you count his rich, nutty former victim Mason Verger (Oldman), who, under the influence of poppers, sliced off his skin to please his would-be paramour Lecter and now lives as an unsightly invalid devoted to revenge (by having Lecter eaten alive by wild boars). Gone also in this sequel is the moving fragility of Clarice's emotional struggles. Ten years later, she has morphed into a tough, isolated-by-choice working woman who has difficulty earning the respect of the men in the Bureau and her superiors, despite having the highest kill rate of any female FBI agent. Her “daddy” issues are also brought front and center this time, and the climax proves she's capable of slipping into a dead faint and resolving things like “ordinary” movie women. Most of the film's gore is reserved for the last 10 minutes of the movie, which culminates in a scene that's gag-worthy in every sense: It's as horrifically revolting as it is comical. Otherwise, Ridley Scott (Gladiator, Thelma & Louise) shrouds this movie in dark, misty light and murky interiors. Scott, seems to have devoted more time to the overall visual look of this piece than to its psychology or plotting. Moreover, nothing about Lecter and Starling honestly belongs to the realm of half-obscured twilight. Both characters are brutally forthright and uncloaked with each other. Hannibal misfires on so many levels that we have to wonder if there is more than one meaning to this story's wild boars.