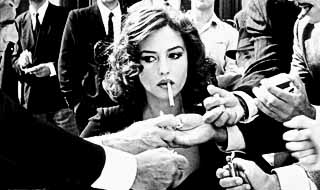 A nostalgia for things past, a kind of dusty sentiment, envelops the films of Italian director Giuseppe Tornatore. Best known stateside for 1989's Cinema Paradiso, Tornatore -- 44 years young -- reaches out to the past in his work or, more to the point, grabs us and takes us back with him, rubbing our noses in tiny Italian histories. Like Cinema Paradiso, this new film revolves around a young, film-infatuated boy living in a small village -- Castelcuta, Sicily, to be precise -- in 1940, the era of Il Duce's fascist ravings, patriotic fervor, and slowly unfurling disaster. Unlike Tornatore's earlier film, however, this isn't all hearts and flowers and flickering silver-screen shadow plays; Malena, whimsical at first, steadily darkens, its youthful storyline twisted by the dark smear of war and its attendant rationings, both physical and emotional. Renato Amoroso (Sulfaro) is 13 and overripe with teenage hormones. Like the rest of the boys in the seaside Castelcuta, he's smitten with the lovely Malena Scordia (Bellucci), a young seamstress whose husband is away at war. When Malena makes her way through the town's picturesque streets, all eyes turn as she passes by, but none more so than those of the scrawny Renato. Unlike the other kids, who seem only to want to bed Malena and be done with her, Renato falls head over heels in the worst sort of puppy love, vowing to himself that he will be her guardian angel until her husband can return from the front. News soon arrives, however, that Malena's soldier has been killed, which precipitates a creeping tonal shift in the film. Up to this point, Tornatore has been content to pass the time showing us Renato's idle daydreams (and their moister nocturnal counterparts) as he imagines himself and his love in a series of Hollywood tableaux: “Me Tarzan, you Malena.” The sudden loss of her husband, however, means the sudden loss of her income as well, and, eventually, destitution. Courted by the oiliest townie around, Malena finds her life spiraling toward the gutter until she is reduced to sleeping with German officers to pay the bills. The local women, never members of the Widow Scordia's fan base, are quick to snipe and gossip. When Sicily is finally liberated, they virtually drive the poor woman out of town on a rail in one of the film's most potent, horrific scenes. All of this is seen through the eyes of Renato, who enters the film a boy and, predictably, exits a man. Despite its breathtaking camerawork (courtesy of Lajos Koltai), Ennio Morricone's sultry score, and Bellucci and Sulfaro's wonderful performances, Malena seems to get lost somewhere on the way to manhood. Bellucci's role makes Malena less of a real, flesh-and-blood woman than some jiggly caricature of the female ideal as viewed from Renato's testosterone-soaked gaze. Whenever he (or, for that matter, anyone else of the male persuasion) spies Malena, you fairly expect his eyes to pop out of his head and steam to shoot from his ears as in the old Warner Bros. cartoons. Hubba-hubba, indeed. When the film changes gears from light coming-of-age comedy to ex-post-facto war parable midway through, it loses its focus and suddenly becomes a much darker beast. Tornatore has two near-perfect films working within the body of one mediocre one -- better to have untangled the storylines and broken up the proceedings altogether. 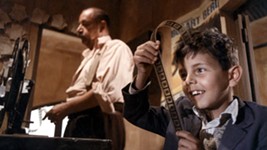