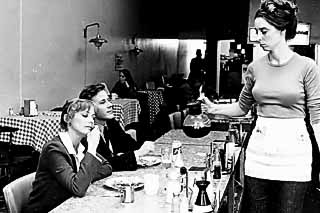 A nagging refrain kept popping in my head as I watched Head Over Heels: M-I-C-K-E-Y M-O-U-S-E. This isn't a Disney film; there aren't any pesky cartoon cutouts cracking wise while belting out Elton John showtunes. Head Over Heels concerns itself with the knocked knees of Amanda, an art restorer at the Met in Manhattan. After Amanda catches her boyfriend soft-shoeing another woman, she takes the first apartment she can find, which comes with a great view and four supermodel roommates. The five gab and gossip like only girls do, swapping make-up tricks and dishing on the best ways to bleed men dry. They also take to a little light voyeurism, keeping a round-the-clock vigil on that sexy thang who struts shirtless in the building across the street. After a couple of chance encounters, Amanda falls for the gently ripped one (his name being Jim Winston, but that's hardly consequential), and he falls right back. But all that changes when Amanda thinks she spies Jim whacking a girl -- that's whacking as in with a large baseball bat and a body bag to hide the evidence. But she can't be sure, so she and her supermodel gal pals add amateur sleuthing and snooping to their repertoire. So why does the M-I-C … business come in to play? Because the whole affair is all so damn Mickey Mouse Club I half expected Annette Funicello to prance out with those goofy ears and a sparkly smile, gushing about how gosh darn good love feels. Head Over Heels substitutes Monica Potter (Patch Adams) as Amanda and tosses in an equally stomach-churning monologue about how love makes you go weak at the knees. Potter has a dewy-eyed, nice-girl blandness about her that, coupled with teen dream Freddie Prinze Jr. (as Jim Winston), makes for something about as vacantly appealing as a prom king and queen. It's a huge letdown considering director Mark Waters' first feature, Sundance darling The House of Yes, showed enormous promise (although it also bears the lamentable distinction of having launched Prinze Jr.'s film career). Head Over Heels whitewashes the originality and, well, weirdness Waters showed in his first film, although it's impossibe to imagine anything starring young poster-pups Potter and Prinze Jr. could be particularly edgy. The script (by Ron Burch and David Kidd) doesn't help them much. The romantic interplay here consists of painfully wince-worthy lines, the likes of which you'd expect to hear at the food court from mall-going girls and boys fumbling toward their first tentative courtships. With a love story so uncompelling as this, one would hope for some saving grace, and Head Over Heels thankfully has one in the form of four impossibly leggy ladies (Harlow, Milicevic, O'Hare, Fraser). While the supermodels' characters are thinly sketched at best, they manage to imbue humor and grace to every glazed look or diva-bitchy remark. But for all their charm, even they can't salvage the clunker outfitting them. By its climax, Head Over Heels has fallen into such a series of uninspired contrivances and treacly rock-candy it makes your molars hurt. The most painfully teeth-gnashing bit? Suffering the absolute indignity of seeing Freddie Prinze Jr.'s face airbrushed onto a Titian painting. It's a fitting metaphor nonetheless -- Head Over Heels has the one-dimensionality of that painting ... or maybe a Mickey Mouse cartoon.