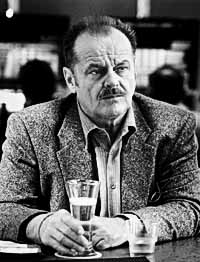 Despite its cast of powerhouse thespians and occasional touches of nervy hyperrealism, Sean Penn's The Pledge is a surprisingly uneven and perhaps even mediocre character drama. Director Penn, following up 1995's The Crossing Guard and 1991's The Indian Runner, has always been tuned in to stories of men in turmoil, ruled by their obsessions. Here, he and screenwriters Jerzy Kromolowski and Mary Olson-Kromolowski adapt Friedrich Dürrenmatt's sinewy page-turner about a police officer driven to madness by his promise to bring down a child killer. Hours before his retirement, detective Jerry Black (Jack Nicholson) skips out on his luau-themed fete when the brutalized body of a little girl, Ginny Larsen, is discovered in the snow outside of Reno. A handful of coincidences result in the arrest of a mentally impaired statutory rapist (an unrestrained Del Toro), from whom a perfunctory confession is extracted (by Eckhart, the standard bearer of glib, beady-eyed bureaucratic malice). But Jerry fixates on the crime, convinced by a seeming clue in Ginny's school artwork that he has failed to make good on his vow to the girl's parents (Michael O'Keefe and Patricia Clarkson). Even after he settles into a kind of domestic accord with a surrogate family, operating a service station on a bucolic stretch of mountain road with a waitress (Wright Penn, virtually unrecognizable) and her eight-year-old daughter (Pauline Roberts), Jerry becomes increasingly obsessed. The plot has the obvious trappings of a police procedural but little of the conventional execution; the film is so character-driven that it's unlikely to appeal to thriller fans (evidently the reason Warner Bros. has marketed the film so minimally, a particular surprise given its talent pedigree). Fair enough, but it doesn't necessarily deliver on the psychodramatic intensity of a character piece, either, seeming curiously flat despite Nicholson's unimpeachable performance. Penn's gift as a director is his ability to wring each nuance out of his actors in a scene, just as his gift as an actor is to find and transit those nuances of his own. He's far less adept, at least at this stage in his career behind the camera, at developing and sustaining tension throughout the narrative. For this reason, the high-wattage supporting cast (which includes Vanessa Redgrave, Helen Mirren, Harry Dean Stanton, and Mickey Rourke) seems lost in what amounts to a series of evanescent one-scene cameos, all good enough, but with none building on the previous. Likewise, offbeat choices in the film's look and sound add edge from time to time: In a scene set in a cramped turkey barn, a cacophony of bird noise eerily eclipses the dialogue, suggesting the animal chaos behind the veneer of agrarian Americana. Yet other choices, like the recurrent double-exposed, panoramic nature vistas, slow-motion flashbacks, and an overbearing Hans Zimmer score, are more middle-of-the-road. 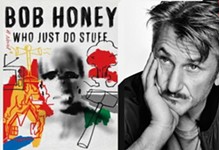 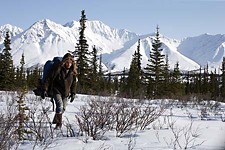