I vaguely recall first seeing that little ditty about sugar and spice and everything nice -- maybe embroidered on a pillow, probably in pink -- as a little girl and thinking, what a crock. The new teen-cheer comedy Sugar & Spice starts out with that same sticky sweetness: Perfectly groomed cheerleading captain Diane (Shelton) wakes up in her perfectly pink bedroom, looks into her heart-shaped mirror, and instructs herself to “turn that frown upside down.” Is she for real? Nope, and that's what makes the film a welcome subversion of the genre. There's no big cheer competition to win here; Diane and her A-squad best friends have bigger fish to fry when Diane gets pregnant by her quarterback boyfriend Jack (Marsden). Jack and Diane (get it?) are booted out of the house and pockets of their parents, and they need cash to start their new family. Ever inventive, the squad devises a plan: They'll rob banks. Just like with cheering, they know they'll need lots of practice. They study all the relevant material (lots of late-night viewings of Reservoir Dogs, Dog Day Afternoon, and Tim Conway's The Apple Dumpling Gang). They consult the incarcerated mother of Kansas (Suvari) to get pointers from the best. They even have a trial run ripping off the lunch lady's lockbox. Like Clueless and But I'm a Cheerleader, Sugar & Spice has a flashy, hyperstylized look and script and the sparkle-clean morality of a Formica-Fifties piece. (It's no coincidence the girls' heist getup is a “Betty” mask and red, white, & blue cheer rags.) There's even a Busby Berkeley homage, a fur-clad Winter Extravaganza with legs kicking and apple-cheeks grinning. Director Francine McDougall and writer Mandy Nelson aren't asking the audience to sneer at the squad, who go nowhere without their cheerleading uniforms and share everything, even their “monthly visitor.” Rather, we're simply asked to accept this bizarro world and go with it. And it's easy to, as the cheerleaders quickly endear themselves to us, especially Shelton's Diane. But the comedy doesn't always work. For every zinger, there are two flat jokes around the corner. And the film is dreadfully hampered by the narration of Lisa, the bitchy B-squad captain and police informant (played unappealingly by Sokoloff, from The Practice). Lisa's commentary is vulgar, distracting, and very rarely amusing; her presence is a killjoy to the oddball proceedings surrounding her and consistently drags us away from the renegade cheerleaders' alternate, preferable universe of camaraderie and crime. She's a wet blanket on the firestarter script, but not enough of a damper to completely rob us of all the A-squad's anarchic fun. These girls may be sugar and spice, but they're equal parts piss, vinegar, and resourceful pluck. 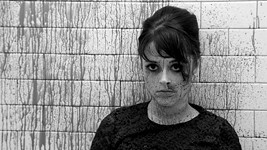