F.W. Murnau's 1922 vampire classic Nosferatu gets a boost from Merhige's fictional account of its creation in Shadow of the Vampire. If anything, it should have people racing to Blockbuster to view the original. I know I did, and for my money, Eddie Izzard's flouncy portrayal of the original film's protagonist, Gustav von Wangerheim, is one of the year's best performances. Ditto for Malkovich as Murnau and Dafoe as actor-cum-vampire Max Schreck. The whole picture is one big Stanislavsky orgasm, actually, and your enjoyment of the proceedings is going to have a lot to do with your relationship with these three methodical hams -- how many winks and leers to the audience can you take? Merhige, who turned up on my radar in 1991 with his paean to bad vibes, Begotten, here goes a more traditional route, eschewing the black-and-white histrionics of his previous outing in favor of dramatic, stark color and meticulously re-created scenes from Murnau's original film. The premise is this: Murnau, eager to make the most realistic vampire film ever (not as hard in 1922 as it is now), hires as his star the mysterious Schreck -- a real bloodsucker -- promising him various crew members in return for his fearsome performance before the cameras. A vampire playing an actor playing a vampire is a nifty conceit, and with Dafoe driving this particular hearse, we are at the very least guaranteed some definitive scenery chewing. Any film that has not just Dafoe but also Malkovich, Kier (late of Paul Morrissey's Warhol-produced Blood for Dracula, no less), and cross-dressing Brit comic Izzard is bound to be interesting, and Shadow of the Vampire is most certainly that. Merhige, eager to make a roundabout statement on the vampiric nature of the filmmaking process (and presumbably Hollywood in general), bedecks his film with scenes of the film's other metaphorical nosferatu -- Malkovich's Murnau -- laying waste to the very lives of his cast and crew via exsanguination and a very Aryan sort of laissez-faire. The script, from Stephen Katz, offers plenty of chewy dialogue for Malkovich to sink his teeth into - in his waistcoat and goggles he looks like some amphetamine-crazed madman, directing the action with an iron fist and a titanium will; the ego has landed. It's Dafoe as Schreck, though, that commands our attention even more than Malkovich (an actor who never met a line reading he couldn't devour and then regurgitate mincingly for our benefit). With his yellowed, bald pate, chittery rodent's fangs, and clacking nails, stooped and corsetted, Dafoe is the very image of repressed sexuality -- or rather, the absence of sexual restraint -- noshing on male and female necklines with equal abandon. (In one terrific moment, idly talking with the film's crew, his arm shoots out, lightning quick, snatches a wayward bat from mid-flight, and pops it into his frenzied maw. As the Master Thespian would say, “That's Acting!”) For all its stentorian performances, though, Shadow of the Vampire is a bit much, from the detailed period sets to the final, bloody scene. Unlike Schreck, the film tries a bit too hard. This nosferatu, elegantly wasted, needs only to stand and leer to command our attention. Merhige's film, on the other hand, yells and capers. Even Renfield knew the imposing value of remaining silent (and eating a bug or two) from time to time. 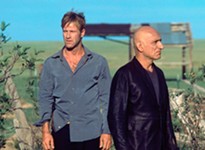 Suspect Zero
There's a reason why this FBI agent who's chasing a serial killer has constant headaches: He's in the middle of a murky movie that mixes arch style with police procedural.