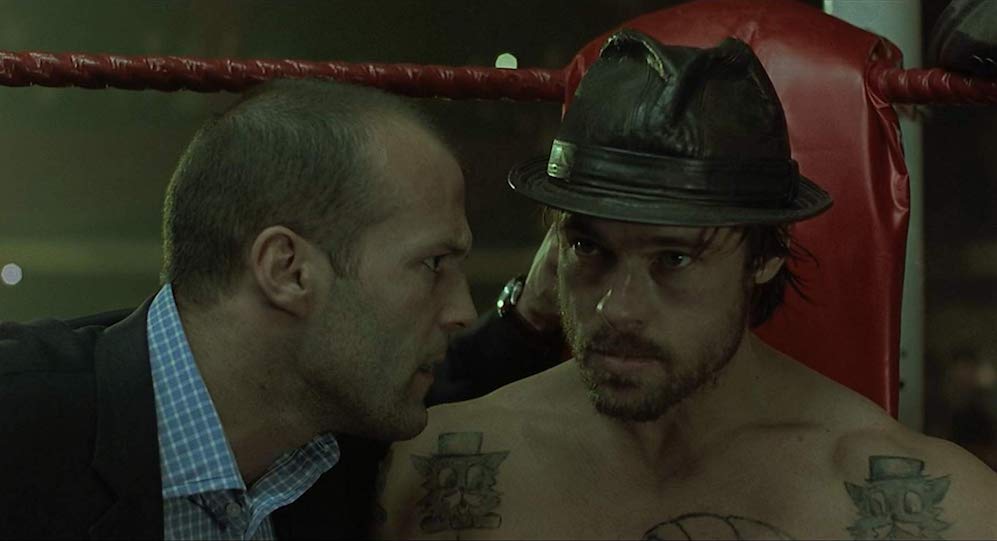 Is Guy Ritchie a stylistic provocateur or a slyboots looter of Quentin Tarantino's filmic footlocker? Only his barber (and perhaps his new bride) know for sure. What is certain is that Snatch, Ritchie's follow-up to last year's smash hit Lock, Stock and Two Smoking Barrels is likely to polarize the critical camps (and already has, for the most part). Its hyper-violent comic bloodshed is sure to offend some, while others will embrace the film's ferocious editing and manic, rocket-fueled pace (courtesy of editors Jon Harris and Les Healey). And then there's Tim Maurice-Jones' snappy, everything-and-the-kitchen-sink cinematography. Snatch is nothing if not watchable: It has the insane, popcorn rhythms of a Road Runner cartoon, and for that reason alone it's a minor masterpiece. Never have so many characters done so much damage to each other with such an interesting assortment of ordnance. In this respect the film echoes the wild excesses of the gangsterific shoot-'em-ups arriving from Hong Kong circa 1990. It's John Woo minus the thieves' code of honor, transposed to modern-day comic-Cockney London. In other ways, Snatch also updates classic British heist comedies such as Charles Crichton's celebrated The Lavender Hill Mob -- no Alec Guinness, of course, but we do get ex-soccer bad boy Vinnie Jones and an incomprehensible Brad Pitt. It's almost a fair trade. Like Ritchie's previous film, Snatch revolves around a spindly series of often-confusing storylines that eventually meet up and pay off, big-time, in the final reel. There's the unlicensed boxing-match promoters Turkish (Statham, who also narrates the proceedings) and Tommy (Graham), who run afoul of vicious bastard Brick Top (Ford) when their fighter takes a permanent dive into oblivion. In his place, they enlist the aid of Irish Gypsy bare-knuckles boxer Mickey O'Neil (Pitt), a fast-talking schemer with a penchant for first-round K.O.s. Then there's Avi (Farina), a New York-based diamond importer on the trail of a 84-carat super-rock stolen from Antwerp by gambling-obsessed Frankie Four-Fingers (Del Toro). Avi, his British connection Doug the Head (Reid), and a trio of East-London lowlifes (James, Gee, Ade) are all involved in the race for this mighty chunk of inanimate carbon against the legendary Azbekistani psycho-killer Boris the Blade (Serbedzija), who, like everyone else in Snatch, wants the rock for himself. Then there's Jones' Bullet Tooth Tony, a dapper fixer of other people's problems who has an eye toward mayhem. All of these characters -- and what seems like a thousand more -- make for a highly entertaining film, part broad comic farce and part grisly charnel house humor. Farina's Avi is a ripe, mythmaking part, and Pitt, an actor who can seemingly do no wrong, manages both hilarity and horror (frequently in the same scene). Ritchie pulls out all the stops with Snatch -- the film has (rightly) been compared to Lock, Stock and Two Smoking Barrels, although it certainly feels as though Ritchie is trying to top himself here, and to his credit (and my amazement) he does. Snatch is a tighter, more resilient film than its predecessor in every way right down to the opening titles. It reminds me of when a young Aussie wunderkind named George Miller pulled off the unthinkable and topped Mad Max with the exuberantly psychotic The Road Warrior. I've said it before and I'll say it again: Now that's entertainment!