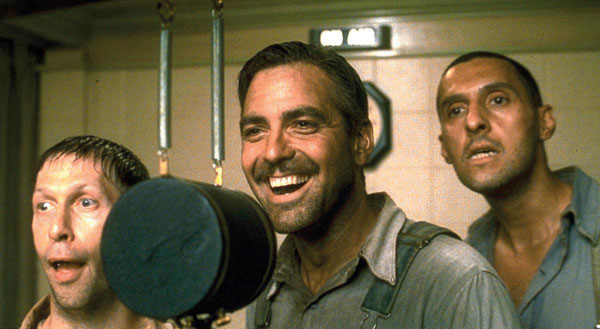 Whether you leave the theatre loving or hating the Coen brothers' latest is going to depend a lot on your past experiences with their films. The Barton Fink camp -- serious, edgy, surrealists all -- are likely to find the proceedings here too silly. It's the Coens at their most goofy, raising the stakes on Raising Arizona's low-brow shenanigans by expanding the canvas to include not just the dusty backwater burgs they love so well, but also the whole of Depression-era Americana. It's a sprawling film and the comic tone matches Joel and Ethan's broad, comic brushstrokes to a T – this is what you get when you give these two sufficient finishing funds (you can thank France's Studio Canal) and zero suits-on-set. Silly or not, however, the fact remains that O Brother is a remarkable film. From its performances on down to director of photography Roger Deakins' sun-baked, dirty-ochre cinematography, the film is all of a piece. As the opening titles inform us, the plot owes much to Homer's Odyssey (although the Coens themselves have gone on record saying that, really, they hadn't bothered to read the damn thing until just lately). Clooney, Turturro, and Nelson are, respectively, Ulysses Everett McGill, Pete Hogwallop, and Delmar O'Donnell, a trio of chain-gang escapees seeking a (possibly mythical) treasure while on the lam from a diabolical sheriff. Their travels take them all across the depressed, dustbowl South, out of one jam and into another, their paths crossing and re-crossing a bizarre series of characters (some fictional, some less so) until they finally return to their “home” and accomplish Everett's main mission: the search for his estranged wife Penny (Hunter). While the film may at first seem to be little more than a finely crafted cluster of Coen-style set-pieces (which, in many ways, it is), the whole of it is thematically united by a particularly affecting Americana/bluegrass score from the likes of Harry McLintock, Emmylou Harris, Allison Krauss, and the Soggy Bottom Boys. The latter is in reality Clooney, et al. The boys on the lam are the boys in the band, having recorded an unknown-to-them hit record that becomes the film's unofficial theme song. It's worth the price of admission (and then some) to see Clooney perform the track in disguise and onstage at a political rally overseen by Charles Durning's scheming Governor Pappy O'Daniel. Again, it's silly stuff to see this American heartthrob and icon dancing about like a scarecrow on corn liquor, but it's also one of the most commanding comic performances I've seen lately. At his best, Clooney, who seems to be channeling the spirit of Johnny Depp as Ed Wood by way of Errol Flynn, could give Jim Carrey a run for his money -- the role is that outrageous. Turturro fares worse -- he's too mean, but Tim Blake Nelson, as the low-IQ bumpkin Delmar, is just right, mixing pathos and naïveté with a kind of desperately eager-to-please charm. He's like a puppy, all hooded eyes and nonexistent chin. As in most Coen brothers films, it's the smaller roles that make the film. John Goodman's Cyclopean bible salesman turns out to be both a hoot and a holler, and The Practice's Michael Badalucco -- as gangster George “Don't call me Babyface” Nelson -- is one of the Coens' better sidetracks into human parody. I wouldn't agree that this is the Coen brother's best film, as some have said. Fargo and the underrated The Hudsucker Proxy are more fluid and rely less on their penchant for unstable comic characters. But O Brother manages to be somehow more sympathetic to these oafish-seeming simpletons. By the end of the film you realize nothing in the filmmakers' world is as simple as it at first appears.