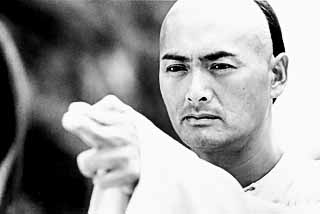 “Leaping lizards,” you might hear yourself exclaim the first time you see Crouching Tiger, Hidden Dragon's characters capering effortlessly up walls and over rooftops. It's a stunning display, the first of some four or five fight scenes that follow in Ang Lee's flawlessly elegant martial arts movie. Fans of Chinese action movies are sure to marvel at the seamlessness of Crouching Tiger's art and artifice. Newcomers to the style are likely to drop their jaws in blissed-out glee while muttering something about not being in Kansas anymore. Like Oz, Lee's China of several centuries past is a fantastic creation: equal parts familiar, foreign, eternal, and surreal. It would be incorrect to say that Tiger is the crowning culmination of the various strands, sub-specialties, and themes of Hong Kong action films; instead, it is a masterful synthesis of generic conventions and creative imagination, a sublime amalgam of some of the best tendencies and talent our times have to offer. It is the action sequences that start audiences babbling (how can you not after seeing the climactic fight scene waged from swaying bamboo treetops?), but the film is much more than its breathtaking parts. It succeeds as a great pulp yarn, a historical drama, an epic love story, a humorous action tale, and a modern feminist fable. Chow and Yeoh star as the unrequited lovers, too sensitive to social and professional expectations to act on their feelings. These two megastars of the Hong Kong cinema, who have made recent breakthroughs in American films, have practically waited their entire careers for roles this good. Yeoh, as a mature businesswoman and fighter, stands in contrast to the young woman played by Zhang Ziyi, whose impending marriage and its social restrictions fuel her private secrets. Also lending their talents to Crouching Tiger are wizard martial arts choreographer Yuen Wo-Ping (The Matrix) and musician Yo-Yo Ma, whose haunting cello solos are rich with resonance. Lee, however, may be the most unconventional part of this team. After a directing career that began with Taiwanese-American comedies of manners (The Wedding Banquet, Eat Drink Man Woman), Lee dove into note-perfect portraits of uniquely American moments (Jane Austen drawing rooms in Sense and Sensibility, Seventies Connecticut in The Ice Storm, and the Civil War in Ride With the Devil). Now, after shooting Crouching Tiger in China in Mandarin (with English subtitles), Lee has been viewed by some as rediscovering his roots. Although there may be truth in this opinion, it discounts the revelations, craftsmanship, and sheer entertainment value of Crouching Tiger, Hidden Dragon. The movie is an epic work of accomplished skill and grace. There are some sections that some may feel work better than others, but there's no mistaking this world for Kansas. (See related interview with Ang Lee in this week's Screens section.)