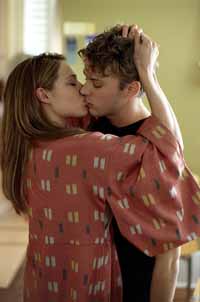 Antitrust has it all -- duplicitous schemers, killer sesame seeds, dead code poets societies, laughably bad CGI mansions -- and then some. The trouble is it's not all that sure what to do with it. Styling itself as a cutting-edge, ripped-from-the-headlines cyber-thriller in the vein of Irwin Winkler's 1995 Sandra Bullock vehicle The Net and Iain Softley's Hackers, Antitrust throws in everything and the desktop computer, and then chucks it all out the Windows 2000 with a storyline that makes less sense than the current state of tech stocks on the Nasdaq. It may not succeed as the suspenseful techno-barrage it aspires to be, but it's almost certainly one of the best unintentional coder comedies of the new millennium. Handsome boy modeling-school reject Phillippe plays garage programming hero Milo Hoffman, who cooks up a killer app with buddy Teddy (Yee Jee Tso) while slumming at Stanford. Almost instantly, he's hired away from his fledgling startup by billionaire junk-food addict Gary Winston (Robbins, woefully miscast but clearly eager to please), the head of Portland-based the Synapse Corporation. Winston is the film's Bill Gates stand-in, and he's currently plugging away at something called NURV (which, sadly, stands for “Never Underestimate Radical Vision”), a new satellite-powered communications system which will turn every TV, cell phone, and computer in the world into a whole new type of information-delivery platform. Once there, Milo notices that Winston's program seems able to come up with a solution to every crisis that arises, while out in the real world, the best and the brightest non-Synapse-affiliated programmers keep turning up dead. Something, somewhere, is amiss in this Jolt Cola-and-CD-ROM world, where the day-care playground is overseen by a giant, all-seeing mouse (the digital kind) and the key to all the mysteries lies in a giant Lego jungle gym. What? I kid you not. Does Milo's long-suffering artist girlfriend Alice (Forlani) really love him? Why is the Department of Justice on Milo's case to rat on Winston? And what's up with Rachael Leigh Cook's anime-sized peepers? Antitrust is never short of questions like these, but it also never seems to have any good answers. Not that director Peter Howitt (Sliding Doors) or scribe Howard Franklin let that get in the way of the onrushing semi-story. No, Antritrust wears its inherent silliness as a badge of honor, virtually daring you to ignore the massive, gaping plot inconsistencies. When Milo can't seem to get inside one of Synapse's super-secret compounds to discover what's really going on, he comes up with a scheme straight out of Toy Soldiers meets James Bond, and, wouldn't you know? It works. Half the fun of watching Antitrust -- and it can be fun, in the same way watching Bill Gates squirmily trying to parse his way out of his own recent woes with the DOJ was fun -- is in tracking the constant stream of inanities that flow from the screen and envelop you in a soothing cocoon of dumbness. (The other half of the fun is in waiting for Claire Forlani to change facial expressions. I warn you though, it's a long wait.) Unlike the aforementioned Hackers, an equally silly film near and dear to a lot of geek hearts (I count myself among them), Antitrust tries too hard to keep one foot firmly in the reality of the current tech boom, instead of keeping its tongue firmly in cheek where it ought to be. “Information wants to be free” goes the old cyberpunk credo, but Antitrust -- bursting with cyber-hipness -- just makes your head hurt. 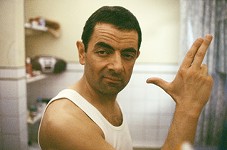