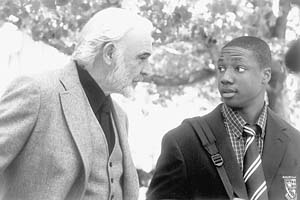 To watch Gus Van Sant's new Finding Forrester is a lot like realizing your gifted and talented child isn't a kid genius after all. Maybe it's unfair to hold his previous, better works against this neatly packaged slice of hokum, but fact is, it wasn't so long ago that Van Sant was putting out edgy, provocative, gorgeously surreal pieces. Before that kindly fuzz-bomb Good Will Hunting, Van Sant was consistently making art that defied convention: thematically challenging films with astructural narratives and moments of dazzling visual incoherence. They didn't always work, but even the failures were mud-caked gems (My Own Private Idaho, Even Cowgirls Get the Blues). His earlier work teems with distinct, devastating characters and arresting images, like houses falling from the sky or hallucinogenic reveries. So what's so awful about Finding Forrester? Nothing, really. That's sort of the problem. It's a soft, slack little film about a reclusive J.D. Salinger-type writer (Connery) and the inner-city prodigy (Brown) he nurtures. The script, by Nicholls fellowship winner Mike Rich, follows in the same tried-and-true steps as Scent of a Woman: Naïf meets hang-dog, whiskey-savaged mentor; they swap life lessons and, in a pivotal, courtroomlike scene, mentor saves naïf's hide while simultaneously redeeming himself. Hoo-wah! Actually, the screenplay, like everything else in Finding Forrester, is mostly restrained (which can and may be confused with “dull”). But the script is like a needling elbow to the side, trying to nudge the audience into wringing out some wet ones, so much so that it produces the opposite effect: an off-putting indifference. Despite the uninspired, irritatingly conservative script (“But wait! The kid's from the ghetto! That's edgy!”), Finding Forrester is an agreeable enough outing at the cineplex. Sean Connery eschews his usual sccchhhexxy-Shhhhccccottish thing and delivers a rumpled, affectionately towering performance; newcomer Rob Brown, as the urban boy wonder, holds his own quite well. The cinematography has a stately, genteel elegance. The soundtrack (including Miles Davis and Bill Frisell) is note-perfect. So what's so awful? Nothing. But at least something awful would have gotten me to sit up in my seat, might have quickened my pulse. As is, Finding Forrester is a nice-looking, nice-feeling exercise in conventionalism that sure could use a couple of transvestites and maybe a house falling from the sky.