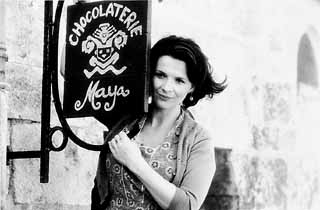 Like its title implies, Chocolat tastes good in the moment but leaves behind little nutritional substance. This English-language movie is set in a provincial French village in 1959 and deals with the pressing question of whether the seductive and mysterious powers of chocolate can soothe the priggish tendencies of the local townsfolk -- and during Lent, no less. Hallström, the director of My Life as a Dog, What's Eating Gilbert Grape?, and last year's The Cider House Rules, has a recurring affinity for stories about small-town eccentrics, and Chocolat also falls into this category. The movie has almost a fairy-tale quality that sets it apart from the demands of strict realism and also packages a tidy moral lesson made easy to swallow by its lush chocolate coating. Beautifully cast, the performances are all delectable, especially that of lead Juliette Binoche. However, the characters are all bogged down with traits that telegraph their entire personalities in a matter of seconds and leave little to further discovery as the film progresses. It begins as Vianne (Binoche) and her daughter Anouk (Thivisol, the child star of Ponette), attired in two red hooded capes, arrive in the sleepy village of Lansquenet and rent a storefront and the living space above it. Vianne opens a chocolaterie filled with irresistible confections of her own making, based on secret recipes handed down to her from her mother. Vianne has a mysterious knack for being able to guess each person's favorite chocolate treat, and also makes no secret of her never-married status. Her behavior and her temptations are the whispered buzz of the town. Appetites become aroused and desires piqued. The order of traditional life in the village soon becomes threatened. A crotchety old woman melts her armor with a bite of chocolate, the new parish priest (O'Conor) resists the sanctimonious piety of the all-controlling local nobleman (Molina), another man works up the courage to ask out the town's career widow (Caron, in a practically wordless performance), and a long-suffering woman finds solace in Vianne's kitchen. But when a group of riverboat vagabonds (led by the dreamily seductive Johnny Depp) dock, the town is whipped into a frenzy of xenophobic fervor. Can chocolate save the day? Do you have to ask?