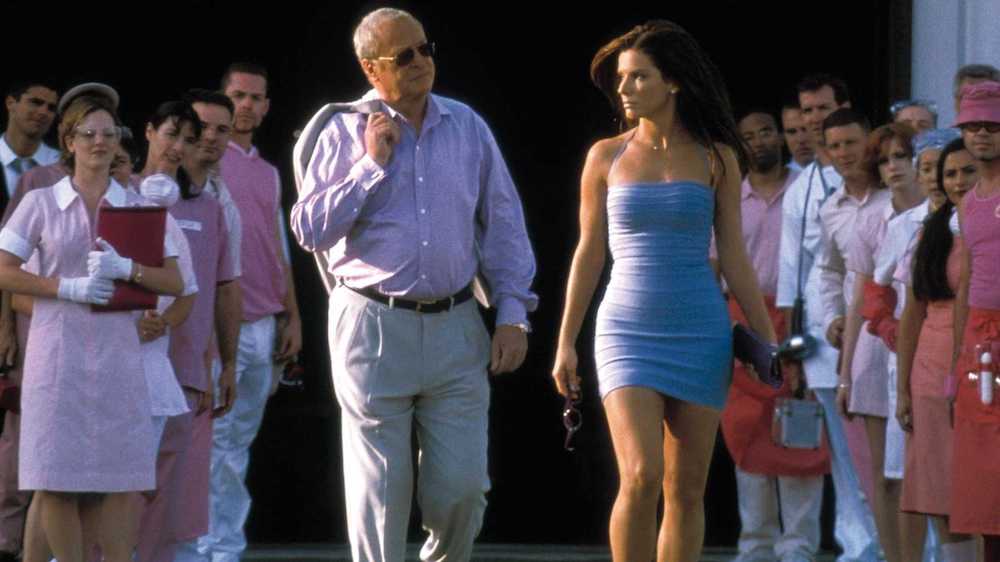 Any film that gets William Shatner singing again is an ace in my book, and when it's topped off by an appealingly spunky performance from Bullock, well, that's just icing on the cake. I won't say that Miss Congeniality -- which was shot in Austin and San Antonio this summer and is the first film open to have utilized what was to become the new Austin Studios soundstage facilities -- is the funniest comedy of the year (Owen Wilson's performance in Shanghai Noon is tough comedy to beat) but it is a remarkably solid, streamlined, action-comedy in the ugly-duckling-to-gorgeous-swan genre that elicits more laughs and genuinely affecting moments than you might expect from its tepid ad campaign. Screenwriter Marc Lawrence, who also penned last year's underrated Bullock vehicle Forces of Nature, clearly knows his way around comedy of this sort and gives Bullock a chance to play to her comic strengths. With assured direction from Petrie and a supporting cast that rarely misses a chance to play up a gag (notably Michael Caine, who hasn't been this droll since 1990's A Shock to the System), Miss Congeniality may be a fluffy holiday confection, but it's one that's ingratiatingly amicable and often laugh-out-loud funny. You couldn't ask for a better film to take off the edge after a week of pre-holiday stress. I realize that may sound to some like a vaguely backhanded compliment, but the film manages to strike a tone that's neither as snide as much of the comic fare we've seen this year nor as random in its humor. Simply put, it's a fun little film, eminently watchable without burdening viewers by trying to be anything other than a broad, solid comedy. Bullock, in full tomboy mode, plays FBI special agent Gracie Hart, who infiltrates the Miss United States Pageant to ferret out a mad bomber called “Citizen.” Along for the ride is former Law & Order hunk Bratt as FBI agent Eric Matthews, who's eager to prove himself to his superiors via this plum assignment. Initially, Hart balks at the gig (her idea of a great Friday night involves taking out her aggressions on the Everlast bag she has hanging in her tiny living room), and the idea of wading into a sea of Maybelline and bikini waxes rankles. There are precious few actors around who can toss off wonky, tomboy spirit with the apparent ease of Bullock (Meg Ryan has come close, but Bullock's combined girl-next-door meets no-bullshit appeal plays infinitely more naturally), and here she lets it all hang out, playing the first half of the film with all the reticent charm of a harried professional badass and then slowly, charmingly segueing into a believable beauty queen. You're not sure whether to hug her or quaff a few beers with her, or both, and that's clearly part of the attraction. Famed cinematographer Laszlo Kovacs is behind the lens, but you'd never suspect it was the same guy who shot Five Easy Pieces and Paper Moon -- scenes are restrained and there's precious little flourish to the compositions, which, come to think of it, is just what a comedy of this sort requires. Caine, Shatner, Bratt, and Bergen (as the pageant's prima donna director) all turn in solid performances, but Miss Congeniality is Bullock's show all the way. It's a measure of her comic talent that she makes this creamy slip of a film as genuinely engaging as it is.