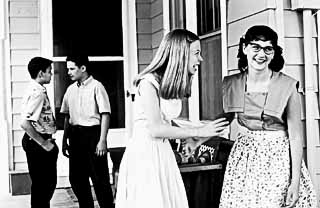 After having indelibly burned his public persona into that of the kvetchy George Costanza on Seinfeld, Jason Alexander turns his talents to behind-the-screen work with the direction of this Fifties coming-of-age story Just Looking. Despite some cute moments, however, Just Looking fails to create a seamless and believable web of measured performances and period color. The script by first-time screenwriter Marshall Karp borrows plot points from other summer coming-of-age movies, although it also throws in some new curves and many amusing bits of dialogue. But every smile the movie evokes becomes erased by a subsequent moment of clunkiness. Ryan Merriman plays Lenny, a Jewish 14-year-old Bronx boy beginning his summer vacation of 1955. His father has died before the beginning of the movie, and his mother (Lupone) has recently remarried. Lenny's new stepfather is the local butcher, and in order for the new family to make a smooth transition, Lenny is sent to live with his pregnant aunt and her non-Jewish husband in the comparative countryside of Queens. Like all 14-year-olds in coming-of-age movies, Lenny is obsessed with sex, and his goal for the summer is to “witness an act of love.” Toward this end, he had unsuccessfully tried peeping through the keyhole of his mother and the butcher's bedroom, and then that of his pregnant aunt and uncle's. Fortunately, he comes to know Hedy (Mol), a former brassiere model and a nurse. “She's a bra model and she lives on my block!” exclaims the beside-himself Lenny. “No,” points out his new best friend John (Franquinha). “She lives on my block. You're just here for the summer.” Lenny schemes to see Hedy in bed with her boyfriend, and he and John also participate in daily meetings of their Sex Club. With two other neighborhood Catholic girls, they talk about sexual mysteries while exhibiting a nervous swagger meant to disguise their awkward curiosity. It's all talk and no action, and many of the scenes with these four kids have a real ring of truth. Others fall flat, and make us want to remind Alexander about W.C. Fields' dictum about the dangers of working with children and animals. The adults fare better, with several nice turns among them and a standout performance by Lupone in her brief time onscreen. Just Looking won't become a mainstay of the prolific coming-of-age drama, but, as its title indicate, it may be worth a perusal -- especially if you're tired of the way teen sexuality is portrayed in movies from the post-Porky's generation.