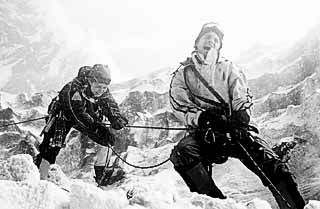 Cliffhanger meets The Wages of Fear meets K2 may have sounded good at the pitch meeting, but on the screen it plays more like some bizarre surrealist take on why mountain climbing is an essentially flawed idea. Like the Vegas house, the mountain always wins in the end (and if you doubt that, I suggest you see what Sir Edmund Hillary is up to these days). Campbell has, in the past, been a fine director of the action form. His Bond outing, Goldeneye was a marvel of suavely timed action set-pieces, and The Mask of Zorro was the best swashbuckling update since 1976's Swashbuckler. Vertical Limit, however, pales in comparison to Campbell's earlier work. It's a huge, bloated, hulking movie that perhaps would have fared better with me during the deadly hot dog days of summer (when it was originally scheduled for release). It's cold out there now, though, and all the snow, hypothermia, and pulmonary edema in this film just makes you want to run home and down a mug or two of Swiss Miss. O'Donnell and Tunney play a brother and sister rock-climbing duo who, as the film opens, face the ultimate disaster while climbing a sheer cliff face in Utah. Bloodied but unbowed, Tunney's Annie Garrett moves on and eventually ends up on the cover of national climbing magazines, while brother Peter hangs up his crampons for, well, nothing much. When Annie is trapped on K2 with obnoxious Texan extreme billionaire Elliot Vaughn (Paxton), Peter must enlist the aid of a motley bunch of yahoos (and a Pakistani munitions depot) to stare death in the face (one more time) and save the day. Fresh it ain't. Campbell's style is mired in an outrageously cliché-ridden script by Robert King (who also penned Cutthroat Island and if that doesn't ring any warning bells then chances are you're deaf) that piles one disaster on top of another on top of another ad nauseam. Thirty minutes into Vertical Limit you're wondering who are these numbskulls? And why should I care? Apparently, you shouldn't. Campbell tries awfully hard to drum up some character-driven elements to the proceedings, but the film's real star is that old debbil K2, the roughest, toughest mountain this side of the Pecos. Not one, but two, major avalanches are lying in wait for our intrepid young hero (O'Donnell's bleachy grin is edging into new, uncharted smarm territories) while a strange backstory involving Paxton's nefarious doings on yet another expedition fail to engage satisfactorily. Tunney, former indie film ingenue-turned-studio vixen is mildly engaging, but only just. Like an out-of-control Olympic luge, Vertical Limit rockets through hairpin turns and stomach-twisting vertigo and never quite regains its track. With some positively shabby green-screen and CGI effects peppered throughout, it's a lousy summer blockbuster invading your holiday space. Just say no. 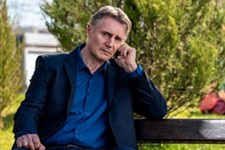