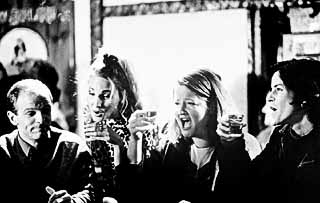 This Boston-based sudser ought to come with its own bubble machine. The way it manufactures turmoil surpasses all known quotas and believability. And that's too bad because it didn't have to be that way. Screenwriter and co-star Davidlee Willson has the kernel of a good story here but it drowns in a pool of overblown reactions, bad accents, and misdirected focus. Debuting at Sundance a couple of years ago (where it won the Audience Award), this melodrama is the kind of little indie effort that deserves recognition despite falling short of plaudits. The story tells the struggle of one family's reunion after 16 years of separation. Most of it covers familiar territory, but instead of playing to the movie's strengths (i.e., the actors and the story's genuine heart), it lines the territory with thick layers of schmaltz. Tyne Daly plays the matriarch of three grown daughters -- single and husband-hunting Diane (Sucharetza), married but financially troubled Donna (Hugot), and divorced and bitter Deb (Sheedy). Matriarch Ann suffers a heart attack at the beginning of the film, and from her hospital bed she asks her daughters to find their long-lost brother. It seems that Ann and her husband Lee (Davidson) had a fourth child -- a boy named Daniel (Willson) -- but when the couple divorced 16 years ago Lee left with the boy and Ann retained custody of the three girls. The divided family has had no contact in the intervening time. Lee has become a successful businessman in the interim and Daniel is now a graduate student at Harvard. As the girls cross the Charles River and become involved in the life of their soon-to-be-married brother and his somewhat snooty wife, the movie takes on a fish-out-of-water slant. Inevitable conflicts arise from the collision between bowling alley and Ivy League cultures. Additionally, brash-mouthed Deb (who is wildly overacted by Sheedy) carries a giant chip on her shoulder toward her absent dad -- toward all men, really. And this raises the question of whose story this is anyway. It's narrated by Daniel in a personal voiceover, it also purports to tell the story of the consequences of the social revolutions of the Sixties and Seventies, and, by virtue of her histrionics, Sheedy can be said to be the focal point of The Autumn Heart. The movie is not without endearing moments, but every time you begin to feel close to the drama something heavyhanded and obvious invades the space and destroys the mood. They clog the film's arteries and make The Autumn Heart a solid candidate for a bypass.