Oh, to be in sixth grade again, rolling the percentile dice on the lunchroom table and knowing full well that D&D creator Gary Gygax was ruler of the world. Well, okay, it got pretty boring pretty fast, actually, and eventually I did get up the courage to do more than stammer at a girl, but don't go telling that to the millions of fans of the eternally geeky, pre-pubescent role-playing game. Talk of a Dungeons & Dragons film has been percolating around Hollywood for well on a decade (or two), and certainly the game was, and is, ripe for translation to the big screen. More's the pity, then, that the end result is as laughably bad as a first-level wizard. You'd think with all the stunning advances in computer graphics and CGI animation that the film would be chock-full of hideous, effectively rendered beasties, but no, the swooping pans and tracking shots around the kingdom of Ismire are as tackily phony as a bad blue-screen shot. Ray Harryhausen brought more life to his fantastic stop-motion creations on a bad day than Dungeons & Dragons could ever hope to achieve. The end result is more like a spoof of role-playing geek clichés than it is a cohesive – or affectionate – film. Solomon, rumored to be a fan and player of the game, has crafted (and I use the term loosely) a muddy, overreaching mess of a film that seems cobbled together from bits of Krull and various sword-and-sorcery hokum. There's nary an original idea in sight, and even a minor cameo from Dr. Who himself, British actor Tom Baker, falls by the wayside, seeming to have stumbled in from a Swords of Shannara novel next door. Whalin and Wayans play a pair of bumbling thieves (with honor, no less) who become enmeshed in a royal plot by evil sorcerer Profion (Irons) to topple the kind Empress Savina (Birch, all pout all the time) by stealing the fabled staff of Red Dragons. Accompanied by nice-girl magic wielder Marina (McLellan) and Dwarf Elwood (Lee Arenberg), the pair dash this way and that, clumsily chasing after both their heart's desire (gold and treasure) and love among the ruins of what appears to be some idealized medieval playscape. The other day a friend of mine asked me what the term “chewing the scenery” referred to – I'm sending him to Dungeons & Dragons to study Irons' performance in detail as I can think of no finer definition. Usually the soul of ill-tempered reserve, Irons here not only chews the scenery, but actually regurgitates it and then downs it a second time for effect. Bad actor. Sit. Stay. The less said about Whalin's Wesley Crusher-inspired acting and Wayans' goggle-eyed tomfoolery, the better. Honestly, the only thing that really, truly matters here are the dragons. Tolkien's Smaug they're not. They're not even much more interesting than Magic Puff, I suspect. Speaking of Smaug, fans of this sort of thing are advised to stay put until Kiwi auteur Peter Jackson's Lord of the Rings triptych is released next year. This dragon, sadly, is DOA. 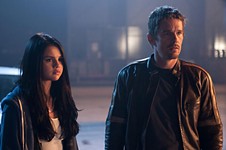 Getaway
Ethan Hawke and Selena Gomez try, but they can't getaway from this action mess. 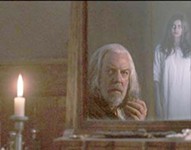