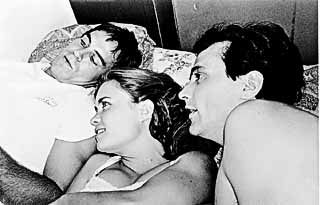 Thanks to the likes of Neil LaBute and Todd Solondz, filmgoers commonly associate tastefully twee urban lifestyles with emotional terrorism. Though this psychodrama by writer-director Jon Reiss makes all the same connections -- it probably seemed more observant during its 1998 festival run -- it's still worth a look in a well-deserved, overdue theatrical release. Dysfunctional marrieds Robert (Hipp) and Hallie (Schram) strive to add a baby to the many accouterments in their lime-washed Spanish-style home. She's shrill and domineering; he's a pliant, pasty-faced schlemiel who sublimates his baser urges into David Lynch-style “art” photos of maggoty roadkill and insect mating. Enter Zack (Kestner) and Sophie (Mitchell), housesitters from hell who pull a power play after Robert and Hallie's vacation. Robert watches meekly as they abuse his credit cards, feed the dog leftover takeout, and get dibs on the master bedroom. Soon, Sophie's clamping his nipples in the basement. Despite these developments, the plot is strangely slow to build, while Reiss lingers on static, tilted compositions of dirty dishes and domestic decay. But the second act picks up the sprung pace of a thriller, as the malevolent, frat-boy machismo of Clooney-haired Zack promises to push masochistic Robert over the line. Though it seems sterile and studied at times, and the denouement drags, Cleopatra is remarkably assured, particularly for a feature directing debut (followed by this year's rave documentary Better Living Through Circuitry). Aspects of the story are shopworn -- the terror-couple element of Kalifornia, the homeowner torment of Pacific Heights, and an egregious theft from George Sluizer's nonpareil 1988 nailbiter The Vanishing. But Reiss doles out some sick surprises, and his cinematographer, Matt Faw, has wicked fun with mise-en-shots of hypochondriac Robert's homeopathic tinctures, herbal lozenges, and power tools. Of the ensemble, Mitchell (High Art) has the least screen time but stands out by somehow managing to infuse her character with heart; the press materials and early reviews praised her as a kinkstress who “steams up the screen,” but she's far more nuanced an actress. It's not for lack of trying that Schram can't seem to spring into three dimensions as the sort of vagina-dentata Yupette who's such an easy mark for satirical filmmakers. That said, it's still a hoot when Alexis Arquette, as a hooker in drag, maligns her furniture and raids her closet for Prada. 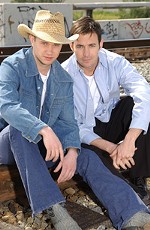 The Trip
The Trip begins with a police car zipping dramatically along a desert highway. A scorpion skitters along a rock in extreme close-up, and the soundtrack ... 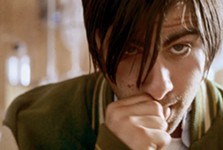 Spun
Drive. Wait. Score. Pop. Repeat. Being a speed freak is hard work. Repetitive and endless and tiring. And funny? Spun takes everything about this extreme ...