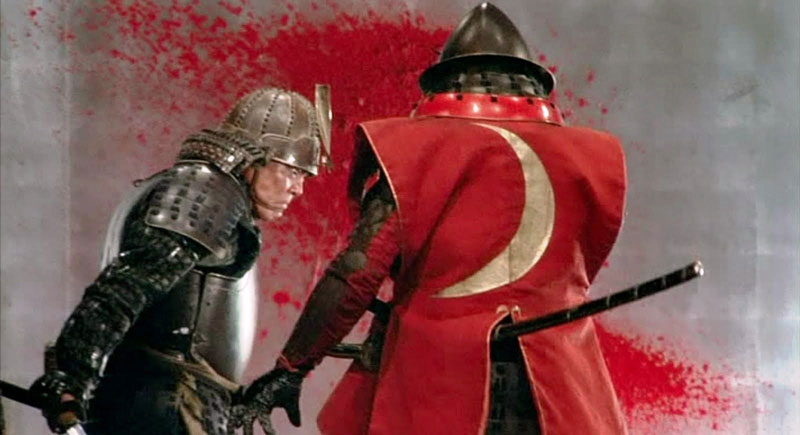 Akira Kurosawa's1985 film Ran is one of the 10 best films ever made, period. I'll brook no argument from the peanut gallery on this one. It's right up there alongside Intolerance, Citizen Kane, Breathless, and a handful of others that have come to be regarded as essential pieces of cinematic Art with a capital `A.' It doesn't hurt matters, of course, that Kurosawa used Shakespeare's King Lear as a template -- in Ran, Lear's three scheming daughters are sons, and the action is transposed and commingled amidst a mythic, dreamlike feudal Japan -- but the Bard's influence is heavy and obvious and generously fleshed out in a way not seen before or since. (Kurosawa had previously turned to Shakespeare for inspiration in Throne of Blood, his 1957 adaptation of Macbeth). Like the watershed films of Griffith, Welles, and Godard, all of which fundamentally changed the way the craft of filmmaking was both constructed and viewed, Kurosawa's tremendous influence (and that of Ran) resonates today in the work of such modern masters of popcorn spectacle as Spielberg and Lucas (the latter borrowed heavily from Kurosawa's 1962 film The Hidden Fortress while penning the initial Star Wars), and in the complex, gritty, merciless battlefield depictions in films ranging from Braveheart to Saving Private Ryan. The word ran loosely translates as “chaos,” and that's as good a summation as any of both Lear and Kurosawa's Lord Hidetora (Nakadai, a self-made wraith by the end of the film). Those who found Shakespeare's Old English body of work problematic in high school take note: Ran, while based on the Bard, looks and feels more like an adrenalized fever dream of ultimate power gone awry. It literally shakes your psyche and leaves you gasping in your seat, speechless for hours afterward. Kurosawa's vaunted grasp of visual splendor was never more powerful, from jaw-dropping battle scenes (as Lord Hidetora finds his duplicitous brood turning on him like some omnivorous pack of wild dogs) that positively leap off the screen in hopeless torrents of bloodshed and misery to the wind-washed grassy hills in which the doomed Lord takes maddened refuge. Always there are clouds above, gathering black and ominous, portents of bad medieval mojo rising, and the color-coded armies, with their banners and pennants and bulky leather armor awash in gore. It's almost too much to take in. Ran demands repeated viewings, and rewards each and every time. Kurosawa spent 10 years trying to bring his epic masterpiece to the screen, laboriously designing reams of storyboards years in advance while simultaneously directing his yet another grand masterpiece, 1980's Kagemusha. When financial backing finally presented itself in 1985, the director was already 75 years old. To think that the man crafted this majestic juggernaut of a film (it runs 161 minutes) at an age when most people -- filmmakers or otherwise -- are settling into a comfortable twilight endgame is itself a wonder and a joy. That we have another chance to see his magnum opus once again on the big screen (with newly struck prints and subtitles, no less) is just about the best holiday gift any film fan could ask for. 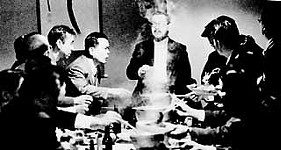 Madadayo
Kurosawa's 30th and last film is Madadayo, which translates as "not yet." Regarded as one of his most personal films, Kurosawa uses incidents in the ... Akira Kurosawa’s Dreams
Kurosawa is one of the greatest legends in the cinema, and certainly the most recognized Japanese director in the Western world. Dreams is an apt ...