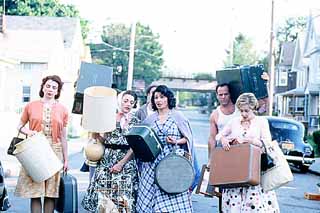 In Staten Island in 1956, owning a house means owning your freedom. It means not having to live in the home of your wife's parents, and not having to sneak sex into the half-hour every week the in-laws are glued to Perry Como on the TV set. After 10 years of Perry Como, Buddy Visalo (Rispoli) is ready to move out. He's found the perfect home, a two-story house big enough for two families. But Buddy has big plans to convert the bottom floor of the house into a bar, much to the chagrin of his wife Estelle (Narducci). She's ever eager to list off Buddy's every other failed venture (pizza delivery, house painting, a limo service). Some men are destined for success; others, like Buddy, are “pregnant with failure.” And sure enough, nothing seems to go right in their two-family house; most egregiously, the family living upstairs (a drink-grizzled Irish man and his very young, very pregnant wife) keep ignoring Buddy's eviction notices. What follows is a gentle, loving picture of what happens when two families (one Irish, one Italian) meet and change each others' lives, told from the wry point of view of the Irish girl's newborn. It's the little things that make this movie work so well. It's the way every scene breathes a different time and place, when the men wore fedoras and the women raised babies for a living. It's the way old ballad standards are sung throughout (by Buddy and by a Chet Baker soundalike), effusing the film with an immediate romanticism, and the way the original score (by Stephen Endelman) quiets the Staten Island shrill of these very loud people. It's the way every scene is shot simply and beautifully. It's the way a courtship is believably portrayed, in all its tender fumbling. It's the way writer/director Raymond De Felitta finds the humanity in even the most unpleasant of his characters, and isn't afraid to show the blemishes on his heroes as well. And it's the way Buddy is absolutely a hero in his own blundering, big-thinking way, and the way Michael Rispoli (of The Sopranos) makes a complicated, endearing man out of what could have been a caricature. Two Family House isn't predictable, just wonderfully familiar, like one of those moony ballads Buddy likes to sing. In Two Family House, it's all about the little things, and the way in which the little things can steal into your heart in big ways. 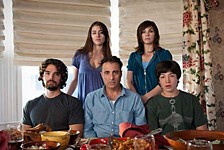 City Island
This manic family comedy starring Andy Garcia and Julianna Margulies has a basic goodness of heart that is counteracted by clunky mechanics.