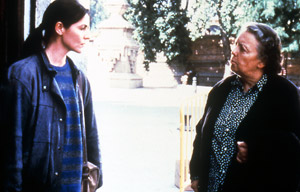 “A mi madre, a todos los madres” is Spanish director Zambrano's closing dedication and it's a particularly fitting one for his debut feature, a grim but ultimately optimistic tale of an Andalusian family's internal struggle to maintain in the face of bad, black luck. There's a hint of Lorca in Zambrano's fractured peasant family. For a contemporary Spanish production, Solas is light years from Almodovar's flip hipness, and it has none of the magical realism that seems to find its way into even the most stoic of that country's film output. Solas almost feels like a misplaced piece of Italian neorealism -- it has the tough-love heart of Anthony Quinn's strongman Zampano and Giulietta Masina's weary smile. And the shabby, nameless locales occasionally recall Fellini's gritty Rome. But only just. Ana Fernandez plays Maria, a 35-year-old who makes her living as a maid and spends her evenings with her abusive boyfriend Juan (Juan Fernandez) downing random shots at the corner bar. Twin disasters strike Maria when she ends up pregnant (the loutish Juan objects to any solutions short of abortion) and her mother (Galiana) arrives in town from the family's tiny village with Maria's ailing father in tow. Initially put out by the fact of her aged mother sharing her already cramped flat, Maria dives headlong into a mixture of equal parts self-pity and whiskey, picking fights with anyone brave enough to come within reach of her barbed, vitriolic fury. Fernandez is excellent as the maladjusted daughter, but the film's heart and soul is embodied in Galina's noble, understated performance. Her mousy demeanor and molelike frame belie the proverbial heart of fire within. She's such an unimposing figure at first glance that she barely registers. By the time Solas ends, however, you marvel at the subtlety Galiana has brought to the role. Zambrano has cast her as the archetypal hard-suffering mother, battered by both husband and life, bloodied but unbowed. It's a cliché of the first rank, to be sure, but somehow Galiana and Zambrano make it feel fresh and vibrant, not at all the stale and shopworn cinematic pillar the role clearly is. There's also a standout performance by Alvarez-Novoa as an elderly neighbor who falls under the mother's charming spell and eventually moves to assist her blighted daughter. Zambranos' film has garnered an impressive array of critical attention and awards (everything from the Spanish Goyas to the People's Choice Award at the 1999 Berlin Film Festival), and with Galiana's standout performance it's plain to see why. Still, Solas is at its core no more arresting than any one of the dozens of Spanish-language familial soap operas that play endlessly on Univision. A homey melodrama, sort of I Remember Mama by way of hard-knuckled Tennessee Williams -- or maybe Lorca -- but a melodrama nonetheless. It's inspired in its own simple way, but there's really nothing new here -- apart from Tote Trenas' voluptuous cinematography -- that strikes a revelatory chord.