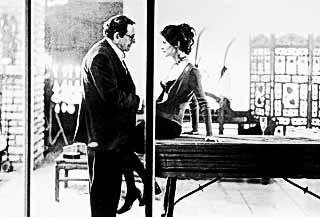 Venus Beauty Institute has Douglas Sirk's soapy prints all over it. The César Award-winning French film follows in the footsteps of Sirk's sudsy “women's pictures” of the Fifties, renowned (or reviled, depending on who you talk to) for their unabashedly melodramatic sentiments. Here, the melodrama revolves around Angèle (Baye), a beautician and aging beauty employed at the Venus Beauty Institute salon. One day, Angèle's monotonous, uninspiring existence is rocked when she meets Antoine (Bihan), a hulking sculptor who spies Angèle at a train station and follows her home. Angèle attempts to resist Antoine's persistent wooing (some might say stalking). See, Angèle's been burned by love: A previous, volatile affair ended in a disfiguring accident, and Angèle's own parents' marriage concluded in a murder/suicide. Venus Beauty Institute is a soap-operatic catalog of obsessive, inexplicable loves. In addition to Angèle and Antoine's romantic traumas, Antoine's fiancée is slowly going mad from her betrothed's infidelity. Then there's the older client who receives weekly facials to keep fresh the face his late wife gave to him. (After a fire badly burned him, his wife had skin from her derrière grafted onto his deformed face.) Later, he becomes obsessed with Marie, Angèle's captivating and barely legal co-worker/friend. Marie, in turn, is won over by the sad-faced man easily 40 years her senior, aided not a little by that neat mink stole and string of pearls he has lavished on her. If I sound doubtful of the realness of any of these loves, it's because I am. This isn't a disbelief in love that resides outside the box of what is standard, what is acceptable. Uncommon love can and has been ably, achingly rendered onscreen. Harold and Maude produced just about the most preposterous pairing cinema's offered up, but it worked, in a giddy, bizarre, beautiful way. And in the hands of a better script and direction (both by Marshall), the logic-defying couplings in Venus Beauty Institute might have similarly succeeded. To Marshall's credit, Venus Beauty Institute looks stunning, saturated with confectionary pinks and blues, and the actors do a fine job with the script, which is, for all its sensationalism, oddly underwritten. But while Sirk's melodramas were steeped in overt histrionics, Marshall's piece plays everything cool, all French and moodylike. As Sirk understood, good melodrama elicits the most guttural of reactions, demands a sob that catches in the throat and settles in the belly. Disappointingly, Venus Beauty Institute is not good melodrama. No despairing sobs here, only world-weary, so-very-French sighs, and a picture that warmed my heart about as much as the cold cream Angèle slathers all over her wrinkling clients. 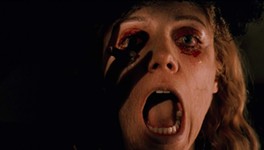