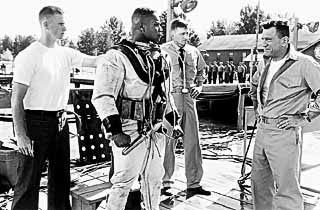 As a post-title note informs us, the story of Men of Honor is “based on the life of Carl Brashear,” the U.S. Navy's first African-American master diver. A forerunner of today's elite Navy Seals, Brashear (played here by Gooding) and men like him were saddled with the unenviable task of suiting up in those clunky, brass-helmeted, deep-water diving suits, with only a snaking umbilicus of oxygen-filled cable to keep their lungs inflated and their sanity in place. And, really, you've got to wonder about the mindset of a man who so clearly places himself in an unhealthy profession. Then, as now, the risks associated with the job were multitude: Not only was there the chance of becoming entangled in whatever it was the diver was attempting to salvage from beneath the brine (be it man, vessel, or, if you were on a Ray Harryhausen detail, some sort of giant kraken), but also the nitrogen narcosis and the bends, which, when a diver fails to decompress properly on his return to the surface, can turn his very blood into a deadly carbonated goo. Not the most advantageous job in the Navy, and, for a black man in the late Fifties, not the most hospitable environment to learn in, either. While Men of Honor may be based on Brashear's real-life exploits, it's almost certain that the film takes liberties with the sequence of events and the details. There's a gung-ho, Audie Murphy, do-or-die spirit to the film that overrides reality. Every scene is mission-critical and every glance of Gooding's, with his jaw set in such rigid determination that you fear for his molars, is freighted with terrible meaning. The film takes itself very, very seriously, and woe to the audience member who cracks a smile while watching the unstoppable (literally) Gooding run the emotional gamut from tough-as-leather to tough-as-nails to just-plain-tough. Tellingly, the film opens with Gooding helping his sharecropper father to plow the fields. You ought to be in school, his papa tells him, but young Carl sticks by the old man's side and does what he has to do. Cut to eight or so years later. Carl is enrolling in the Navy, and at the bus depot, his father drawls, “Don't you give up on me, ever.” Brashear, of course, never does, though any man would be sorely tempted to toss in the towel when he finds that Robert De Niro, as the grizzled, racist Master Diver Billy Sunday, is his new boss. De Niro and Gooding push and pull against each other like their thousand and one cinematic forebears -- it's a given, of course, that in the end, right will triumph, the Navy will become more accepting of this fine diver regardless of his skin color, and those scoundrels in positions of power will topple to the ground, smitten by the Truth. (Hal Holbrook is on hand to take the toppling as Mr. Pappy, the dive school's hoary old senior officer. He's not just racist, he's also certifiably insane, and when Master Chief Sunday finally goes against the old coot's orders, you almost want to cheer, had you not seen this coming a good mile or so away.) Supporting roles are mostly given short shrift: Theron as Sunday's floozy wife is interesting, but only just, and Ellis (Map of the World), as Brashear's long-suffering wife, longs and suffers and then longs some more. Men of Honor strives to be an inspirational depth charge, but its power is consistently waylaid by some genuinely hokey dialogue and situations. It's the idealized, simplified struggle of one Navy diver, a solid tale clumsily executed. 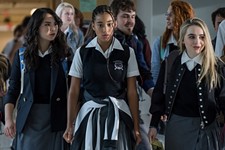 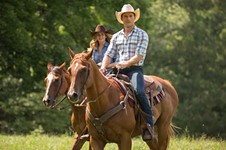