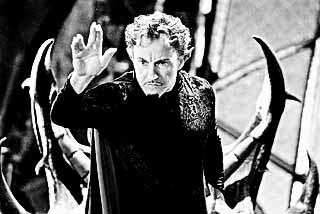 With Little Nicky Adam Sandler can be seen to be stretching his comic deviltry as he strives for some more involved gags, costumes, and effects. Ironically, this ambition has resulted in a smaller payoff in terms of the movie's overall comic effect and cohesion. Creatively, however, you have to admire the effort if only because Little Nicky appears to be more finely crafted and planned than do Sandler's earlier films. Although Sandler's journey to hell is no Deconstructing Harry, his humor here has more cerebral asides that sometimes require a beat or two to catch, as opposed to the obvious guffaws generated by flatulence jokes and peeing on walls. But Little Nicky wanders all over the place, introducing half-hearted subplots, secondary characters, and setups. When they work, the gags can be very funny (the climax includes an absolute humdinger), but too often they seem strewn all over the place, interrupting any narrative flow and sustained interest. Actors are not so much characters in this film as they are physical props. The film's list of players reads like someone's Saturday Night Live Rolodex -- and then some. The sight of Harvey Keitel playing the Devil -- the father of Sandler's Little Nicky -- may be worth the price of admission, dressed as he is in black tights and horns, looking like a beatnik Pan with long fingernails resembling nothing so much as Robert De Niro playing the Devil in Angel Heart. In addition to small roles for folks like Rodney Dangerfield (as the father of the Devil and the inventor of hell -- and guess what? -- he still gets no respect), Quentin Tarantino (doing an amusing riff on the preacher in Wise Blood), and Reese Witherspoon (as a delightfully cheeky angel), Little Nicky is littered with cameos. The filmmakers seem to be like kids in a candy store, crowding all their friends in for a good time, and having fun with effects and things like Robert Smigel's voice impersonations for one of the main characters, a dog named Beefy. Director Steven Brill, who until now has been best known for his acting credits and his direction of the three Mighty Ducks movies, never manages to corral all this mad nonsense into one sustained gigglefest that builds on its previous momentum. The film's rhythm is jerky, bouncing all around the place and making some of the setups feel unnecessary. But if you can picture a hell in which a perfect Monsters of Metal compilation tape is the ultimate Grail, then Little Nicky might rock your world.